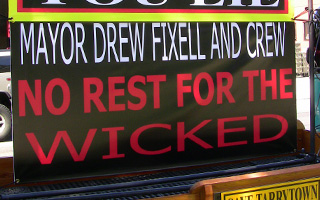 The tragic loss of life, namely, Anthony Ruggiero and John Kelly who died in a manhole filled with noxious gas a little over one year ago, has become a focal point for truth and transparency surrounding the Village of Tarrytown’s government.

This publication carried a front page story in our 2010 Autumn Harvest Issue written by Patricia Hogan Nyarady, a lifelong resident of the Tarrytowns. [The article can be read at riverjournalonline.com/villages/tarrytown/1647]. Mrs. Nyarady started by saying, “There is not a person in Tarrytown who hasn’t been touched in some way by the tragic deaths of DPW worker Anthony Ruggiero and his fellow firefighter friend John Kelly on Labor Day weekend.” She went on to say, “I, like many others, watched the recent Village Board meetings on TV as many friends of these two men stepped up to the podium one by one and shared their feelings of outrage toward Village officials.”

Tarrytown’s Village Administrator Michael Blau was one official who bore the brunt of that outrage. Mrs. Nyarady wrote, “Many took the anger at Mr. Blau a step further, not just for his timing, but for the apparent inaccuracies in the statement [he made to the press] which only served to fuel the anger by what some saw as an attempt to shift the burden of the tragedy to the men themselves [Ruggiero and Kelly].”

Even after an apology [read by the Village Administrator at a later Board meeting] the criticism directed at Mike Blau and Drew Fixell, Tarrytown’s Mayor, has shown no sign of relenting. This publication contacted Mr. Blau and offered him an opportunity to tell our readers his side of the story and address claims made against him by residents at Board meetings. River Journal also offered him the opportunity to read the article before it went to print and to make any corrections if necessary, thus ensuring that his comments would be accurately presented and not editorialized. To his credit Michael Blau thought the opportunity a good one and an interview was arranged for Tuesday, October 4. He did not honor that arrangement and asked in an email that this publication interview Mr. John Stiloski first before meeting with him. River Journal did so. On Wednesday, October 5 at the agreed upon time of 1pm for the interview with Village Administrator Michael Blau – he cancelled. His reasoning was that any interview that addressed his actions would be seen as self-serving. River Journal replied that by cancelling the interview at the last minute his actions could just as easily be seen as self-serving. Mr. Blau supplied this publication with a copy of his resumé instead. 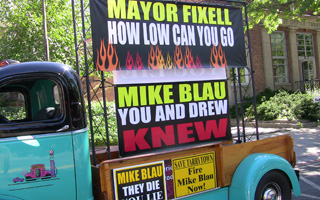 One of the people most critical of the actions of Mike Blau and Drew Fixell around the dissemination of information surrounding the deaths of Messrs. Ruggiero and Kelly is a lifelong resident of Tarrytown, John Stiloski. Stiloski was born and raised in Tarrytown and knew Anthony Ruggiero from childhood. He grew up on Fairview Avenue and as a teenager worked at the Tarrytown Boat Club as a maintenance person and boat painter. It was there that he met John Kelly. “John and I just hit if off because we both liked boats and trucks. John always had a truck,” he said, during a recent interview at his business. In between numerous phone calls and people coming into his office to discuss work related issues, it was apparent that John Stiloski has built a very successful business in car repairs and towing services. “I always liked automotive things like fixing cars and doing body work,” he said. That interest became a career in 1987 when he opened Stiloski’s with one tow truck and a part-time employee. Today he has over 30 trucks and can tow almost anything with wheels on it. He employs 35 people, and his body shop and towing services are known throughout Westchester and neighboring counties.

“John Kelly was eating at my house ten minutes before going over to Consolidated Engine and into the manhole behind the firehouse. He was very generous and thoughtful and never came to my house without bringing something for my two young girls. That’s just the way he was – thoughtful and helpful,” Stiloski said, with apparent emotion mixed in with the words. “When he left my house he went over to Consolidated Engine and shortly after that I heard on the police scanner that two men were trapped in a manhole behind the fire company. I immediately called John’s cell phone but got no response so I drove over there. When I arrived I noticed John’s cell phone on a picnic table and saw that my message to him had not been picked up. When I went to the manhole DPW Foreman Scott Weaver was there. It was then that I learned what had happened,” Stiloski said, in a reflective tone and with eyes that welled up.

According to John Stiloski it was a day later when Michael Blau said to the television cameras that John Kelly had “confined space training.” By his own account Stiloski was infuriated that Blau would make false and misleading comments to the press. “John Kelly had no prior training in confined spaces. What Blau said to the news stations and what he said in his Village handouts were totally contradictory. He made it look like Kelly was to blame for his own death.”

For the past year Stiloski has utilized the “Freedom of Information Act” to request documents from the Village of Tarrytown. The first was documentation of the reported “confined space training program” the Village had offered its employees. “When they [the Village] finally got back to me I was told that no such program existed. I wanted to know what book Mike Blau was getting his information from. I knew John Kelly never had confined space training and yet the Village Administrator made a false statement that he had. That was the first lie,” Stiloski said.

No amount of semantics or dodging by the Village has lessened Stiloski’s resolve over the past year. On the contrary he has intensified his efforts, and earlier this summer he made requests via   a letter petitioning Drew Fixell and the Trustees to “conduct an investigation and report their findings to the public regarding the conduct and performance of Village Administrator Michael Blau before and after the accident of September 6, 2010, which left two Village employees fatally injured.” According to Stiloski and the petition, “He [Blau] has responsibility for the overall performance of all departments that make up Tarrytown government. These responsibilities include, but are not limited to, the health and safety of Village employees. It is his responsibility to create and implement all policies and procedures required by federal, state, county or village laws.”

The NYS Department of Labor’s Public Employee Safety and Health Division [PESH] issued a report late in 2010 identifying the failures of Tarrytown around “confined space” protocol which would have prevented the deaths of Anthony Ruggiero and John Kelly. The report was revealing and detailed. What follows is an excerpt posted on the internet.

John Kelly went into the manhole to try and help Anthony Ruggiero who was thought to have accidentally fallen. It has been a little over one year since both died needlessly and unsupervised. John Stiloski has not forgotten, and even though the Village of Tarrytown has “circled the wagons” as a defensive strategy, that may not be enough for the “slings and arrows” that will continue to rain down.

It may well be awhile longer before Mrs. Nyarady’s hope is realized… “that there will come a time when the friends and families of these brave men will put their anger aside and focus on a positive, worthwhile cause in their memory…” © By Robert Bonvento