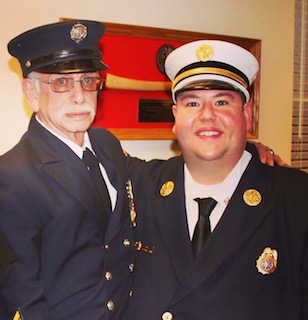 The sounds of drums, trumpets, and excitement will be filling the air for the first time in nearly 10 years on August 12th. The 100%-volunteer Tarrytown Fire Department is dedicated to protecting the lives and property of the citizens of the Village of Tarrytown, the Glenville Protection District of the Town of Greenburgh, New York State Thruway, Tappan Zee Bridge, Hudson River, and the mutual aid response areas with the highest quality and consistently professional service. Even with that outstanding resumé, the fire department wanted to add more to enhance the Village.

Photo: Chief Goldstein with his father and Grand Marshall, Goldie

In 2008, under the direction of Chief Patrick Derivan Sr., the fire department had a very successful and highly attended parade through the Village. Dozens of other fire departments and hundreds of members of the community lined the streets to display their support for the local volunteers.  Patrick has gone back through the ranks and currently serves as an Assistant Chief. “It is important that the residents see their local fire department come out and participate in something great like this. It is a good tradition in the fire service to take care of your equipment and show the Village how much we care about them and our community. Usually when we see the residents, it is because they have had an emergency. Seeing them with a smile on their faces enjoying the show is much better,” Assistant Chief Derivan said. But 2008 was the last time that this Village has seen this parade, and it is time to bring it back.

There were a few key people who were responsible for making this annual event a community spectacle. In the early 1990’s, Jack Murphy formed a parade committee to showcase the tradition that he took a great deal of pride in as a two-time Chief in the Village. Among others on his handpicked committee were Ex-Chiefs Jim Brown, Scott Weaver, and later Joe McCarthy. Sadly, Ex-Chiefs Murphy, Brown, and McCarthy have since passed away. Ex-Chief Scott Weaver, now serves as the parade chair. “We want to make this a very successful event. We are doing it for the fire department and the community, and also in memory of the members 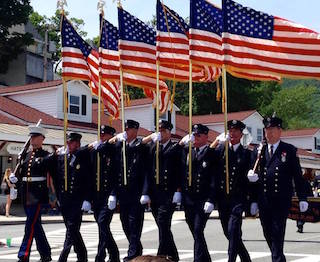 we have lost. Besides, everyone loves a parade,” Weaver said.

In 2012, there was an attempt made by the department to bring this parade back to the Village. The attempt was met with some opposition by the Village Board due to funding. Historically, the event was once funded by a line in the department’s operational budget. The Chief at the time was advised that this was no longer an option.

It appeared that it would be a dead issue for the past 5 years until current Chief Dave Goldstein stepped up for the challenge. “The Tarrytown FD parade was a fond memory for me growing up in the Village. My mother would bring us to Main Street and I would see my father and all the members of the Department march by with great pride. I knew if I had the opportunity to carry on the tradition, that I would,” Goldstein said. When he was elected to Assistant Chief in 2015, he started planning. “All it took was a promise that I would raise the money for the parade, so it would not cost the tax payers anything, and the Village Board granted me permission to bring the parade back. When it came time for the money to be raised, the fire department rallied as it always does. Through fund raisers and private donations, within months we had all of the money needed to throw the event.”

The Grand Marshall of the parade was selected by the Chairman and the committee. Bob Goldstein, has been actively responding to hundreds of fire alarms in the Village for over 50 years. A nine-time Captain of Consolidated Engine and a dedicated public servant lovingly referred to as “Goldie” will lead the Department and their guests down the parade route. Chief Goldstein said, “I would have it no other way. Goldie has marched in every Tarrytown parade that there has ever been. I don’t know how many people have that type of dedication to anything these days, let alone a volunteer service.” 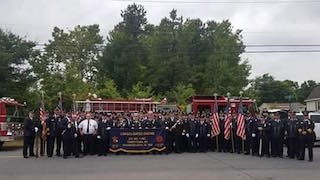 The parade will kick off at 4pm and travel down Broadway at Independence Street, down Main Street, and to the Losee baseball fields. Departments from Irvington, Sleepy Hollow, Montrose, Somerville (NJ), Central Nyack, Valhalla, Elmsford, Ardsley, Spring Valley, Dobbs Ferry, Hastings, Verplank, Ossining, Buchanan, Croton, Piermont, New City, and Mamaroneck will be in attendance along with the Red Knights Motor Cycle Club and the Museum of American Armor.

The stage is set for a great evening in the Village of Tarrytown on August 12th. Will you be there?

Is It Too Early to Start Planning?