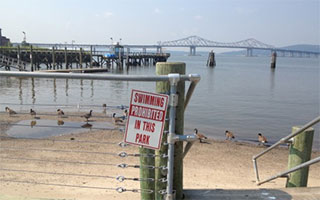 Money will go toward repairing pump station directly responsible for multiple sewer line breaks and discharges of raw sewage into the Hudson. Riverkeeper declares the Westchester County Board of Legislator’s recent approval of $9.9 million for upgrades to the Tarrytown Pumping Station a victory for clean water and citizen partnership. The Tarrytown Pumping Station is part of the Saw Mill Sanitary Sewage District.

The Tarrytown pump station and forced main were directly responsible for multiple sewer line breaks and discharges of more than 20 million gallons of raw sewage into the Hudson along the Westchester shoreline the past several summers, which were reported by Riverkeeper and local citizens.

In the summer of 2011, Riverkeeper submitted comments to the New York State Department of Environmental Conservation (DEC) urging the review of the sewage infrastructure connected with the Yonkers plant and calling for repairs and upgrades to reduce the frequency of breaks and failures in the system.  One hundred and forty-five local citizens joined Riverkeeper in calling for this action, and less than two years later, it was announced that the wastewater infrastructure repair is funded and slated to begin construction in March 2014.

“The successful public lobbying for the sewer repair in Tarrytown shows what the public can do when they speak out on behalf of clean water,” said Tracy Brown, Water Quality Advocate for Riverkeeper.  “Riverkeeper receives citizen reports of sewage releases into waterways throughout the Hudson Valley. Whenever possible we verify, document and try to report on those incidents. When we see a community suffering from repeated system failures we work to find solutions. The planned upgrades to the Tarrytown pump station and replacement of its forced main should bring tangible water quality improvements to the Tarrytown waterfront.”

Tarrytown Mayor Drew Fixell added: “As Riverkeeper has regularly documented, our waterfront has periodically suffered contamination from problems with the county sewer system, so we are very happy to see this project moving forward and thankful to the legislature for funding it.  We also are grateful to Riverkeeper for keeping these issues on the front burner.”

As the Hudson River becomes increasingly popular for recreational water sports, Riverkeeper remains the only source for fecal contamination data across the region. Riverkeeper’s ongoing water quality study, which publishes data online each month (May through October) has led to an increased awareness of this harmful pollution and to important policy changes such as the Sewage Pollution Right to Know Law that went into effect May 2013.
The study is conducted is collaboration with scientists for Lamont-Doherty Earth Observatory at Columbia and Queens College, City University of New York.