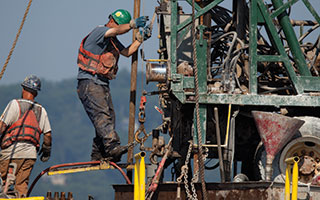 Pearl River in Rockland County is home to one of HDR’s many offices. (HDR stands for the initials of founders H.H. Henningson, Charles Durham and Willard Richardson). HDR is a design partner with Tappan Zee Constructors, LLC for  The New NY Bridge to be built north of the current Tappan Zee Bridge.

By their own account, “HDR is a global employee-owned firm providing architecture, engineering, consulting, construction and related services through our various operating companies.” On their website a “fast facts” set of bullet points reflects that HDR was founded in 1917 and is headquartered in Omaha, Nebraska. They employ over 8,000 professionals at more than 185 locations and have completed projects in 60 countries. In the 2012 Engineering News-Record’s Top 500 Design Firms, HDR was listed as number eleven.  Presently 12-18 months remain in the design phase of the New NY Bridge. In the meantime, a host of pre-construction activities have moved  forward like geotechnical borings into the waterway and on roadways as well.

On the build side Fluor, Granite Construction NE (based in Tarrytown), American Bridge and Traylor Brothers make up the consortium known as Tappan Zee Constructors (TZC). The four companies dovetail in a similar culture of “putting safety first, carrying forth strong ethics in the workplace and responsible financial backing.” As one spokesperson said during a recent interview, “the internal cultures of the companies made it easy to partner with each other in this exciting project.”

In Tarrytown, two locations provide accommodations for staffing of the New York State Thruway office at 303 South Broadway. They house engineers and project managers along with a Community Outreach Center that provides information to the public. The Tappan Zee Constructors consortium at 555 White Plains Road houses the design and construction teams that total approximately 300 people. Design, civil and structural engineers along with safety supervisors all coordinate through six area managers to ensure that this massive undertaking proceeds smoothly and efficiently. At Hudson Harbor in Tarrytown approximately 80 offices will take shape in the former County Asphalt Building. Engineering, quality control and all the superintendents will operate from that location. A start-up date in late August is anticipated for that specific site.

One of the benefits of “design-  build” construction is that it can occur simultaneously. Through the remainder of 2013 residents on the east and west banks of the Hudson River will see a continuation of geotechnical borings in and out of the river. A work trestle will be built to house cranes on the Rockland County side similar to the one that exists on the Westchester boundary. On both the Rockland and Westchester sides the existing sound barriers on the New York State Thruway will be dismantled and new ones installed. The test piling project which is three months in duration will be followed by permanent piles afterwards. The installation of “air, noise and vibration monitors” will be ongoing. Any excessive readings have to be corrected within one hour or the NYS Thruway Authority has been tasked with shutting the project down. One such monitor is  already in place at Tarrytown’s Quay Condominiums and another at Lossee Park. A number of such monitors will be operational on both sides of the River.

With regard to the Tarrytown Quay Condominiums, Tappan Zee Constructors has offered two plus million dollars as mitigation money for upgrading windows and doors as a means of lessening sound during construction. The Quay homeowner’s association is reportedly negotiating with TZC for additional monies.  Sound mitigation money will also be offered to Bradford Mews and Salisbury Point on the western bank of the Hudson. There is no eminent domain procedure on the New NY Bridge project that would provide for the takeover and compensation of property on either side of the Hudson River.

Tappan Zee Constructors according to a spokesperson stated that, “From a design-build standpoint this new bridge is one of the most exciting projects ever. How many times in a lifetime will we get to see a three mile long bridge built from the ground up? Right now it is one of, if not the largest transportation project in the nation. We have the best of the best working in these offices and we will learn a great deal from each other. We will continue to work very well with the villages on each side of the river. Our culture is about being a part of these communities where we live and work. We feel people will be very impressed with how this bridge comes out of the water.”

The New NY Bridge has been given a design-build time span of 5 years and 2 months from January 18th of this year. For the final dollar amount on the new bridge TZC is contracted for $3.142 billion and with the NY State Thruway, administrative costs factored in the total allotted for the bridge is $3.9 billion.

All money will come from the NYS Thruway and be funneled to TZC. A “Ground Breaking Ceremony” by the Governor’s office will take place by year’s end but no specific date or location has been set.