On Monday, October 4, nearly one month to the day of the accidental deaths of Anthony Ruggiero and John Kelly, both overcome by noxious gases in a sewer system, the Mayor of Tarrytown and his Village Administrator apologized to family, friends and the public during a televised Board meeting.

View video of questions raised at the October 4 meeting

[/inset]“I’d like to make a short statement with regard to the press conference conducted on Thursday after the tragic deaths of Anthony Ruggiero and John Kelly on Labor Day. I realize the timing of the press conference was not opportune and some of my statements were hurtful. I want to apologize to the family and friends of Anthony and John and to all the people of Tarrytown. I am truly sorry.”

Tarrytown’s Mayor, Drew Fixell also made the following comments. It should be noted that even with the amplification provided by microphones it was difficult to hear all of his words. 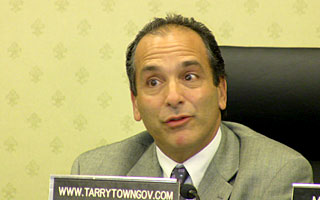 “I also want to apologize for the timing of the press conference and some of the statements that were made…(unclear). I state on behalf of the entire Board…(unclear) … that we’re sorry that this happened the way that it did and recognize everyday that…(unclear)…that these two men are heroes in our Village and should be regarded as such.”