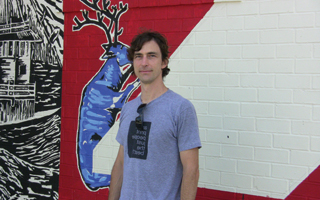 The new Tarrytown Food Market (C-Town) has, to a very great degree, been welcomed by local residents and neighboring residents from the river towns. Yes, there have been some issues to attend to, according to the Planning Board, and the owners of Tarrytown Food Market have worked closely with the Board to ensure that Village codes and recommendations will be honored.

For esthetic purposes, windows have been added to the southern section of the Market, and more recently, a mural. The mural is the result of a request and a collaboration between the Village and the owners to lessen the size and scope of the plain brick façade.

This publication learned of the mural many months before actual work began, and what has transpired since that time is a colorful and time-intensive undertaking on the part of local artists.

We spoke with Jeff White of Sleepy Hollow, the principal artist and overseer of the complex project which has unfolded for all to see along the Broadway corridor. White has lived in Sleepy Hollow for the past three years, having moved from Brooklyn. He has been involved within the community as a volunteer doing clean-ups and wanted to do something that involved more of his skills, namely, painting and drawing in which he holds a college degree. “I put in five very hard years trying to work as an artist, and worked nights and part-time so I could make it as an artist. I had gallery shows and a couple of shows in museums, but eventually I became an art handler. That meant packing and crating art along with installing it, and for the past ten years I have worked at the Museum of Modern Art [MoMA] in New York,” he said. He is by his own report a “front line guy” for the section of MoMA that deals with fine art prints and illustrated books. “In my personal work I get the greatest satisfaction from wood cuts and have been making them more intensely over the last ten years,” he added.

The mural, depicting tugboats on the Hudson River, started with wood cuts, then prints on paper and finally their projection by computer onto the brick façade for artists to trace and paint. One of the artists simply painted free hand from the paper print. White had the thematic idea of tugboats for a variety of reasons. Tarrytown is on the Hudson River and tugboats can regularly be seen escorting barges north and south. In addition the tugboat signifies a series of words and statements that Jeff White finds meaningful like, “break the ice, engage, connect and trust, calm, steady, patience,” all of which appear on the mural. “The boat signifies our own striving to persevere and be tenacious,” he said. 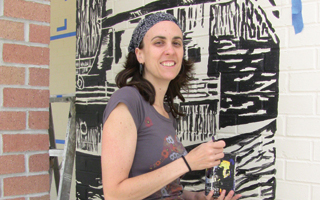 Perseverance and tenacity is imbued in the current mural, with White and other artists working in high 90-degree heat during the day and well into the early morning hours past midnight. One of those artists is Kristen Dreher, an art teacher at Sleepy Hollow High School. White credits her support as crucial in the painting of the mural. “She is talented, committed, enthusiastic, and has spent hours and hours painting. Frankly, if it weren’t for Kristen we wouldn’t have been able to do this,” White noted. Dreher has brought along students from her portfolio and advanced portfolio classes at Sleepy Hollow High School, and she credits them with not only talent but the dedication to see the project to completion. She also returns the respect and admiration of Jeff White and cites his determination as paramount to the successful completion of the mural. 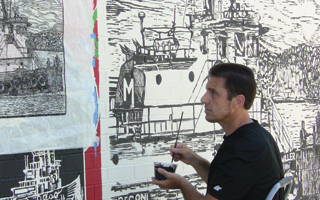 All are to be commended and all have contributed to making art a community collaborative. To the owners of the Tarrytown Food Market and the Village Planning Board, recognition is given as well for their efforts, which, like the tugboat, have proven to be steady and engaging