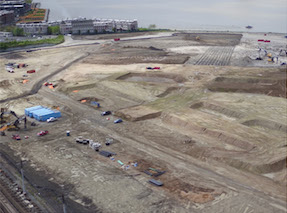 Local residents who haven’t been down to Sleepy Hollow’s Edge-On-Hudson in recent weeks might not recognize the former GM property along the waterfront. The steel pilings and concrete flooring that covered more than 60 acres at the river’s edge are long gone, replaced by graded road beds and the outlines of the “Phase 1” development set to rise on the site in the coming months. Edge-On-Hudson made dramatic progress during the first two quarters of 2017, though some of the largest investment has been underground.  More than 1,300 linear feet of storm water pipes, 1,700 linear feet of sanitary pipes and 800 linear feet of water pipes were installed, along with a connection to Westchester County’s sanitary trunk line.  Installation of electric utility lines is ongoing.

But the action is about to shift above ground, as residents will see granite curb installation and paved roads coursing through the site during July and August, in preparation for vertical construction of new homes in Phase 1 scheduled to begin as soon as the end of the year.  Phase 1 will feature 306 units of housing, including 188 loft-style apartments in the four-story “Loft District” section at the eastern edge of the property, with design elements referencing the Hudson Valley’s industrial heritage; 46 three- and four-story condominium homes; and 72 Town Houses in the “Central Park District,” as well as neighborhood green space.

Grading for the new roundabout that will mark the entrance to Edge-On-Hudson is already complete, with storm drains at grade level installed along roadways.  The lower (western) end of Beekman Avenue will curve north to join the roundabout, linking River Street with new roads within the site.  This will insure a seamless entrance that makes the new development an integral part of the Village of Sleepy Hollow, rather than a separate, gated community. 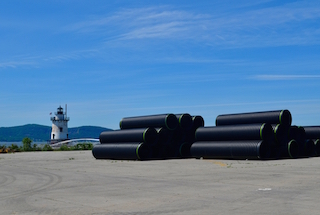 Speaking of Beekman Avenue, drivers will be pleased to learn that the project team is targeting the end of 2017 for the elimination of the temporary traffic light on lower Beekman, and the return of two-way traffic flow.  Steel has been ordered for the new bridge over the Metro-North tracks and demolition of the south side of the old bridge is set to begin in July.  Two-way flow can be reinstated mid-construction, with final bridge construction then completed in 2018.

Truck traffic bringing fill to the site will also slow to a trickle by year’s end.  More than 80% of the fill has already been delivered, including more than half by barge.  Fill operations are expected to be complete by the close of 2017, excepting occasional topsoil deliveries for park spaces.

The first of the green spaces on the property – a “Village Green” of nearly an acre that will serve as a buffer between Ichabod’s Landing and Edge-On-Hudson, and that will also offer a path to the Hudson River –  will also be completed in 2017.

The project has made initial progress on “Phase 2” at the same time, by installing “surcharge” on top of the street layout – which is fill that needs to settle and compact the road bed for as much as six months.

In related work, Con Ed will be installing electric utility lines under the western section of Beekman Avenue over the summer months.

Amid the construction, Edge-On-Hudson continues to find ways to support community events. The traditional July 4th Fireworks display of Tarrytown and Sleepy Hollow will launch once again from Edge-On-Hudson out over the Hudson River.  Later on, in the fall, the site will play host to the “Light the Night” Walk on November 4th, with proceeds benefiting the Leukemia & Lymphoma Society.  Edge-On-Hudson is supporting the walk as a sponsor and by creating a walk team.

Bi-weekly updates on ongoing construction at Edge-On-Hudson are available at: http://www.edgeonhudson.com/updates.

Edge-on-Hudson Wins Silver Award for Community of the Year