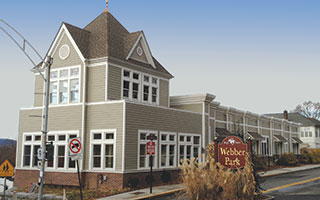 The attorneys for the Open Door Family Medical Center at 80 Beekman Avenue submitted two letters dated April 10, one to the Sleepy Hollow Zoning Board and the other to the Sleepy Hollow Planning Board – withdrawing their current application to relocate the Center to  300 North Broadway or One New Broadway depending on which street one drives down.

The application withdrawal made a moot point of the vote the seven-member Zoning Board was prepared to make. That vote in all likelihood would have been taken place at their monthly meeting on Wednesday, April 17. At the
center of the controversy (and the use of the word controversy is by no means misstated) was Open Door’s request for a parking variance that would have dissolved the need for 33 parking spaces at One New Broadway.

On the cover page of the Zoning Board of Appeals at the Village’s website sleepyhollowny.gov one is directed to all actions taken place regarding the Open Door Clinic’s application, and the most telling one is a letter from the Building Department to the Zoning Board of Appeals dated 3/27/13. In that letter point after point is articulated, refuting claims made by the Open Door throughout the hearings at Village Hall. More eye-opening are the statements coming out of Village Hall as to what actually occurred in dealings with those representing the Open Door. The letter is definitely a “must read” for all parties involved.

So, where does this leave the Open Door with relation to the reportedly multi-million dollar purchase they made on One New Broadway? And, what does it say about their current 80 Beekman Avenue location that is rented (and can continue to be) where they are able to construct a usable 2nd floor for additional offices and services through 2025?

At present no one in the Village – at least no one who’s talking – has the answers to these questions. Can it be that attorneys for and administrators within the Open Door Family Medical Center are regrouping? If so, is the relocation to One New Broadway being planned with a new twist? To paraphrase the saying, one door closes and the other door opens.