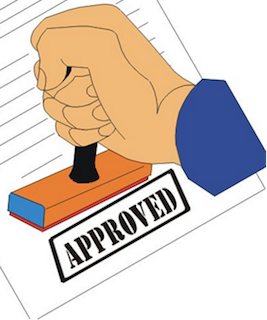 No Permit, No Inspection, No Approval, No Problem!

Let’s address a simple fact for any Sleepy Hollow resident who wants to put a tool shed in their backyard. Regardless of its size, color, or composition of environmentally sustainable materials, a permit is required. Yes, a permit from the Village of Sleepy Hollow. That only begins the process and many a resident can attest to a long and somewhat arduous process before that tool shed is home to tools.

Let’s address another simple fact. The Village of Sleepy Hollow, comprised of elected officials, put up a large metal Quonset structure at the western end of Elm Street and Andrews Lane. Was a permit issued? Was an inspection done? Was an approval given? Say “no” three times and you’ve answered correctly. 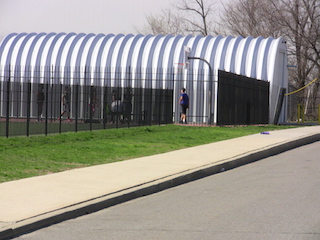 across the street from the Beekman Avenue firehouse. The used Ladder 38 firetruck will be replaced this fall with a reportedly $1M new hook-and-ladder to be housed at the firehouse.

Of interest is that the Village reportedly spent in the area of $100,000 to pour a concrete foundation, buy the metal Quonset structure and place electricity and heating in it. Of further interest is that the hook- and-ladder faces east on Elm Street which is a narrow two-lane inner Village street with parking on both sides. To the right of the Quonset structure is Andrews Lane which is one-way with Barnhardt Park on its western side. A one-way against the truck’s travels hardly provides safe and easy egress when alarms sound. The fact that Barnhardt Park is a playground with basketball courts and soccer facilities, and that the Seniors Center (within an arm’s reach of the Quonset structure) is home to after-school programs and summer camp, does not bode well for the placement of a large hook-and-ladder. 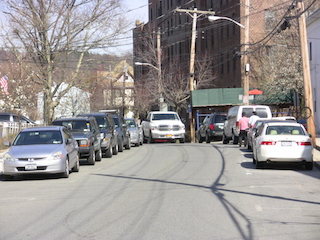 Were residents of the neighborhood where Ladder 38 is housed consulted by Village officials? Were members of the Planning Board notified of the Village’s intent to place a structure overlooking the Hudson River or were Waterfront Advisory Committee members notified regarding view shed regulations? We think not, and have been told as much. And finally, there was no need to consult the Architectural Review Board, because one does not exist in Sleepy Hollow. With one of the largest-ever recorded waterfront development projects to take place on the Hudson River, the Village of Sleepy Hollow has no active Architectural Review Board. This makes absolute sense when one considers the unilateral decisions the Mayor and Board of Trustees are making.

For any resident planning on making comments regarding the document submitted by the Local Development Corporation (LDC) with regard to its east parcel property, they can “save their breath” as is commonly spoken. On Tuesday, April 11th Mayor Ken Wray announced to the world that the 10-day opportunity had come to an end. Hence, Wray has closed the public input chapter.

There are so many questions to be asked regarding the LDC and its dealings within the Village of Sleepy Hollow. The first and most glaring is how can the LDC, which is the owner of the property and the builder on the property, also be the “Lead Agency” determining environmental impacts associated with its development? In any other Village with sound planning intact, the answer would be that the LDC cannot be all three. Former Planning Board Chair Nick Robinson, an Environmental Attorney at Pace University, echoed how preposterous it is to accept the LDC as an environmental protector. However, because LDC Chairman David Schroedel, and Board members Anthony Scarpati, Michael Dawley and Therese Oeste Villavieja, are also joined by another Board member, Mayor Ken Wray, all bets are off as to what can/cannot be done on the site. The first testament to that is the fact that an active railyard has already paid for acreage on the LDC site.

Riverkeeper also questioned David Schroedel (a former trustee; campaign manager to re-elect Ken Wray; also appointed to the LDC Chair by Wray) with this recent letter about the FEIS.

Riverkeeper, Inc. is in receipt of the Final Environmental Impact Statement (“FEIS”) for the East Parcel Redevelopment in Sleepy Hollow, dated March 28, 2017. While we appreciate the Local Development Corporation’s (“LDC’s”) decision to expand the vegetated buffer along the project area adjacent to the Pocantico River, Riverkeeper disagrees with LDC’s contention that restoration of the river is “outside the scope of the FEIS.”  As Riverkeeper made clear in its comments, we continue to believe that the northern portion of the site should be utilized to restore and protect the water quality and habitat value of the Pocantico River to the greatest extent possible.

So where does Sleepy Hollow go from here with regards to detailed (not cursory) traffic and transportation studies, floodplain management and storm water management, construction on Continental and Howard Streets, utilities placement for the proposed DPW garage and new Recreation Center, sewage treatment, a new bridge over the railroad tracks, impacts of construction to include pile-driving along with dust and noise issues, and last but far from least, the protection of the Pocantico River estuary? Daunting questions, all of them. Much easier to downplay their significance and exert absolute power.