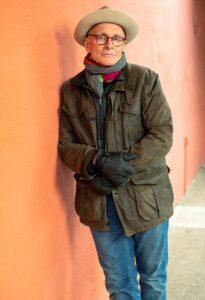 The Capa Space, an education and exhibition non-profit organization, dedicated to exploring and continuing the legacy of ‘concerned photography’ a term coined by the late Cornell Capa to describe photography that contributes to the understanding or well-being of humanity, has announced that it will be presenting an exhibition of powerful photographs by renowned photographer William Abranowicz. The photographs record his journey through the American South with contemporary images of ordinary places that shaped the civil rights movement.

Titled This Far and No Further, the exhibition will be on view at Bethany Arts Community, 40 Somerstown Road, Ossining from Friday, January 7 through Saturday, January 29, 10 – 5 Monday-Friday and 10 – 4 Saturdays.

William Abranowicz is known for his photographs of idiosyncratic moments of daily life and travel with a focus on an intensely personal, even eccentric approach to framing an image. His work synthesizes the essentials of photography with elements of poetry and cinema, capturing moments of sustained contemplation. His work is in collections that include the Metropolitan Museum of Art, The National Portrait Galleries in London and Washington, Bibliotheque Nationale in Paris, and The Getty. Over four decades, he has produced features for nearly every major publication in the United States, Europe, and Asia.

Few people know that two of the most important photographers of the 20th century are buried in Yorktown NY, at the Amawalk Friends Meeting House cemetery. The Capa Space nonprofit organization was created to highlight the legacy of brothers Robert and Cornell Capa who were committed to the idea that peace and social justice can be advanced by photography. The Capa Space offers exhibitions, discussions, films, and classes that support the artistic and documentary endeavors of the community.

Robert Capa is considered the world’s greatest war photographer. He documented the Spanish Civil War, the Japanese invasion of China, WWII including the landing at Normandy, as well as other conflicts. Capa was a groundbreaking photojournalist who placed himself in the middle of military conflicts to document the destruction of lives and property while also capturing the survivors who marched on through life, their human spirit in triumph over unspeakable adversity. Capa died in 1954 covering the French-Indochina war in Vietnam.

Cornell Capa had three major interrelated careers: as a champion of the work of his brother Robert, as founder of the International Center for Photography in NYC and as an advocate for ‘concerned photography.’

For more information about The Capa Space, please visit thecapaspace.org