Brandon Beck’s fifth-grade class read a TIME for Kids article last year about dogs in schools, prompting a discussion about how great it would be to do that at Roosevelt School.

“I ended up talking to my family about it and we were like, you know what, if we had a dog and the dog had a greater purpose than just being a dog in a home and it could help people, it would be awesome,” he said.

Soon after contacting the Mutt-i-grees Curriculum program at North Shore Animal League America, which the article had referenced, the shelter called him about a thirteen-week-old Labradoodle puppy. Dr Beck worked with Peaches for several months last year and arranged for her training before introducing her to Roosevelt School.

Peaches has been spending two days a week at the fifth-grade school since September. Students in a before-school mentoring program help train Peaches and work on their own personal goals. She is in Dr Beck’s classroom and a few others during the day.

The Ossining MATTERS foundation approved Dr Beck’s grant application to pay for the Mutt-i-grees Curriculum, a social emotional learning curriculum the school uses, as well as snacks and supplies. Dr Beck said he would love to see Mutt-i-grees dogs in all Ossining schools.

During a recent Mutt-i-grees lesson on empathy, the fluffy black dog wandered around Dr Beck’s classroom, stopping to let children pet her as they worked. She followed “sit” and “lie down” commands from students who gave her a little treat in return. My Friendship With John Cheever 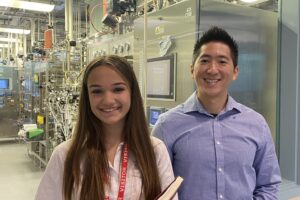 Putting STEM to Work: In Science We Find Purpose