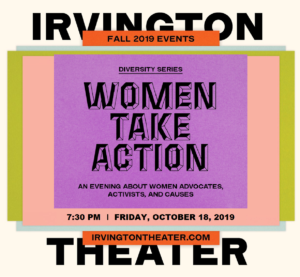 The ITHT Commission, which oversees the beautiful and historic 117-year-old, 432-seat theater in Town Hall of Irvington, N.Y., announced on Wednesday it would hold its first Diversity Series event of the 2019-2020 season, “Women Take Action: An Evening About Women Activists, Advocates and Women’s Causes,” on Friday, Oct. 18, 2019, at 7:30 p.m. in the Irvington Theater.

The event will feature speakers who will discuss — in their own words — what it is like to be activists as women, or to work on women’s issues in the current era.

Kim Gilligan, the ITHT commissioner heading up the diversity series, said this event is important because while progress has been made on many issues in American society, in some ways we still have to fight the same battles over and over again. Women are at the forefront of many of these issues.

“I feel like it is such an interesting time to be an activist as a woman, or fight for women’s causes,” Gilligan said. “For me, there are so many important questions: How does being a woman inform my activism? How does it inform the causes I champion? Or, if you work on women’s issues, regardless of gender, what are you seeing? What is the current state of women? We will address these questions on Oct. 18.”

The panel discussion will be moderated by ITHT Commission Chair Laurie Chock. Panelists will include:

“It is so important to the commission to produce events that shine a light on some of the important issues of our time, but we also recognize that people come to the theater to be entertained,” Gilligan said. “The Diversity Series speakers bring compelling stories with them to the stage, and we believe those who come to the event will be engaged from beginning to end.”

The 2019-2020 Irvington Theater Diversity Series follows on the success of the theater’s 2018-2019 series, which featured well-regarded and well-attended panels and presentations on transgender and nonbinary individuals, immigrants, and special needs self-advocates, all in the words of the members of those communities.

“The commission is especially proud of how the audiences who came to last year’s Diversity Series events left the theater not just entertained but educated and uplifted, too,” Gilligan said. “We knew we wanted to do more events like those this season.”

The ITHT Commission’s Diversity Series will follow “Women Take Action” with an event focusing on homelessness, food insecurity and community gardens in February and “One Thing I want You To Know,” an LBGTQ spoken-word program, in May.

For more information on “Women Take Action,” please visit www.irvingtontheater.com. Tickets are free, but registration is required. A $5 suggested donation will be collected at the event.

The Irvington Theater, located at 85 Main Street in downtown Irvington, N.Y., on the entire third floor of Town Hall, was built in 1902 and hosts film, theater, comedy, music and other events between September and May.

The ITHT Commission was established in 1980 by the Village of Irvington to operate and manage the theater.  The members of the Commission were appointed by the mayor and village trustees.