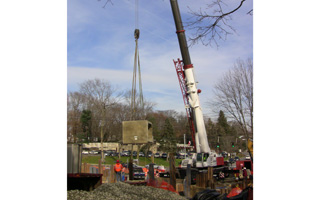 A crane with the capacity to lift 240 tons placed 15 culverts under the roadbed of North State Road in Briarcliff Manor.

Each 5-foot long culvert weighed 33,000 pounds. and was 7 ½ feet wide by 6 ½ feet high. The entire culvert system spanned forty-five feet and the water it will carry will discharge into the tributary of the Pocantico River on the south side of North State Road.

The project, which was bid at $865,000, will be paid entirely by the New York State Department of Transportation directly to the contractor, Morano Brothers, according to Village officials. 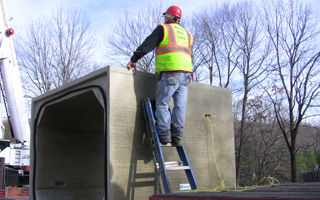 To expedite the opening of North State Road the Village of Briarcliff will expand the pedestrian sidewalk (adjacent to the road) in the New Year. Plans are to make the sidewalk 6 feet wide, add several street lights and landscape the section which leads to the crosswalk at Route 9A.