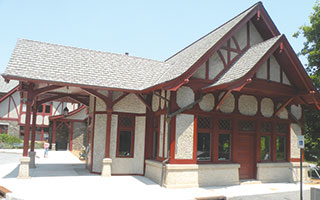 The new Briarcliff Community Center is almost here. Located next to the Village Library, the old Briarcliff train station depot is being converted into a multi-use facility with the intent of adapting it to the changing needs of the community. According to Phil Zegarelli, Briarcliff’s Village Manager, the adaptive use of the facility will provide a central hub adding on to the library and further centralize the focus on the Law Park facilities. The final plans are about 80 percent complete.

The building itself will have two floors featuring Americans with Disability Act (ADA) compliant doors to the outside. On the first floor there will be large multi-use room with seating and room for a small stage. The stage can be used for town meetings and performances and will also be available for rent by outside groups. There will be rest rooms each with baby changing tables and a kitchen where coffee could be available. Plans include a broadcasting room with a cable drop, allowing the village to broadcast emergencyinformation. The Community Center will also function as an emergency headquarters for parts of the Village government and for residents as well. A large generator will provide back-up electricity and there will be multiple charging docks to charge phones and computers. Wi-fi will also be available.

This project is near and dear to the heart of Mayor William Vescio. The idea for the Community Center was born in response to construction of the new library. The library had been too small and was at risk of not getting the needed licensing from the state. Twice the bond referendum was voted down because one third of the residents live in Ossining and are already being taxed for the Ossining Library. It wasn’t until the referendum included the community center, providing all residents with a beneficial and unique space, that it finally passed.

Mayor Vescio has been closely engaged in every aspect of the planning, design and construction. He has been involved with forming the Community Center Committee, hiring the architects, sitting in on design meetings, attending every construction meeting and dropping by the job site daily. He proudly states, “ The Community Center will be a valued asset as we move toward the future. We have reconfigured the library to include the Rec Center and The Historical Society, which we managed to do because we were under budget. Now, with the addition of the Community Center, we can bring the facility into the 21st century with updated technologies.”

Financing for the Community Center has come not only from the Village but also through private donations and the fundraising efforts of “The Friends of the Library” who sponsor the annual Memorial Day Walk/Run.

Melinda Greenblatt, Director of Library Services, is excited about the new space as well. The second floor of the community center will connect to the library through what is now a storage closet. As Ms. Greenblatt explains, “The second floor of the community center will be a continuation of the adult reading area of the library. It can also be multi-purposed. It is being designed to have a variety of nooks and crannies where people can go and use their laptops. There will be additional display areas for art shows or Historical Society exhibitions along the walls.” According to Ms. Greenblatt, the current design includes a catwalk of sorts, overlooking the first floor. There will also be a staircase from the second floor to the outside so that there will be no need to go through the library to get to the space.

Currently, the exterior work on the building is done and the interior has been gutted, asbestos removed and is ready to be finished. According to Phil Zegarelli, an optimistic time frame for completion could be as early as late December of this year, but construction rarely gets done on time so it could be next spring before its doors will open to the public.