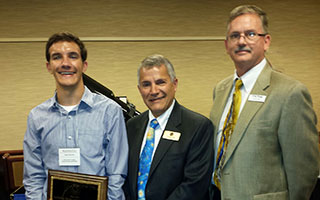 Briarcliff High School graduate and 2013 Intel Science Talent Search semifinalist Mark Moretto recently returned from Atlanta, where he was presented with the National Young Astronomer Award in recognition of his “astronomical” research.

Mark presented his award-winning research to members of the Astronomical League at the group’s national convention. For his efforts, he was awarded a plaque and a state-of-the-art telescope. The Astronomical League is composed of over 240 local amateur astronomical societies from across the United States with a goal of encouraging an interest in astronomy throughout America.

Mark was named an Intel semifinalist in January for his project “Deep Impact Spectral Observations and Naturally Occurring Mini-Outbursts,” which focused on the analysis of outgassing jets on the comet Tempel 1’s surface. For his research, he used data collected by the NASA Deep Impact mission, and found that this outgassing (the removal of gas from a solid) is driven by the sublimation of carbon dioxide, which is not usually the case in comets.