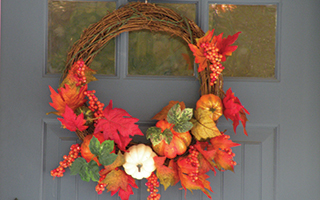 As sure as the leaves must fall and be blown away – more often these days by the rhythmic buzzing of a gas-powered leaf blower – the holidays arrive once again in Briarcliff Manor. High school students have more work that ever as the semester winds down and the Todd School kids can be seen with ever thicker layers of sweaters and jackets. Inexplicably, the middle school students continue to wear shorts and tee shirts even as the thermometer plunges.

Parents can be seen hurling jackets at them through the passenger windows of moving cars during drop-off.

The college students return home to eagerly awaiting families that have sorely missed them, only to have them take off to meet up with their old friends from high school. It has always been this way… Thanksgiving is here even if the kids are actually nowhere to be found.

Falling-falling from the trees
In soft melodies
Sinking, sinking into space
Blown away:

Wandering, wind-bourn thro’ each night and day
Oh such music! Music of the leaves
Falling rhythmically
Surer than the songbird’s melody.

The days right before Thanksgiving seem to be the most fraught with stress. It is a short holiday when you think about it.  The most heavily traveled time of the year with sometimes iffy weather can tax those en route and those awaiting them. A missed flight can mean a missed turkey dinner.   There is extra work at the office that needs to be handled before the holiday, the house needs to be cleaner than usual, and of course there is all the shopping that needs to be done. You cook, you eat, you watch football and it’s done.

Sometimes Thanksgiving seems like is just something to get through.   This is a shame.  Thanksgiving is one of the most beautiful and meaningful holidays that we have as a nation. It transcends politics, religion, and ethnic diversity. Everyone is included in Thanksgiving. It represents our vision of our highest selves, a vision of cooperation, sharing, and giving thanks for our families, biological or by design, and our nation, despite no one being perfect.

Briarcliff has celebrated Thanksgiving for over a hundred years.  It was not the home of Puritan settlers sharing meals with the Indians in 1621, but it was the home of the Mohegan Indians who were part of the Algonquin nation.  A tribe called the Sint Sincks occupied the land along the Hudson River, north of Tarrytown and south of Croton.  Not much is known about the tribe except they called the river “Shattemuc” or “the stream that flows both ways.” Another tribe, called the Tankitekas, lived several miles inland as far west as the Pocantico River.

Harvest festivals were not uncommon in America, but it was not until Abraham Lincoln proclaimed it an official holiday in 1863 that it became an accepted annual event. 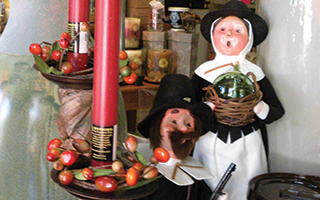 Briarcliff was not incorporated as a Village until 1902, but in the 1880’s local residents were celebrating the holiday.  Marion Dinwiddie, as a small child, would visit the family of Emil C. Becker on Thanksgiving .  He had bought the old Thomas Van Husen homestead on Scarborough Road. She remembered that the dinner consisted of “a suckling pig with a string of sausages round its neck and an apple in its mouth.”

Although the original Thanksgiving included wild turkey, venison, clams, waterfowl, fish, lobsters, berries, fruit, pumpkin and squash, by 1900, the Thanksgiving meal had changed. If you lived in Briarcliff you might have had plum pudding, jelly tarts, plum puffs and ladyfingers along with your turkey. Briarcliff was at that time famous for the high quality of dairy products from the Law family farms, so exceptionally fresh butter, milk and cream would have been available.  Family games after dinner would have included Charades, Tiddlywinks and Taboo.

Getting ready for Thanksgiving could sometimes take up to a month in advance. The entire family would participate in the planning, cooking, polishing of silver and china and the ironing of tablecloths. The excitement would build as the preparations were made, especially amongst the children.

If you had the means and the inclination, you could choose instead to go out to dinner for Thanksgiving.  There were several elegant options for the turn-of-the-century Briarcliffian.  If you wanted to go into the City you might choose the Park Avenue Hotel.  The menu from November 1900 included lavish options such as rum punch, clear green turtle soup, sorrel with bread crumbs, turkey stuffed with chestnuts, goose with apple sauce, lamb, smelts with anchovy sauce, beef with artichokes, diamond-backed terrapin, potted quail with brussel sprouts, peaches with rice and sherry, salmon with cardinal sauce, red-head duck with currant jelly and an assortment of pies and candy.

It was in the 1920’s that the Macy’s Annual Thanksgiving parade began, so one can imagine that after a day in the city viewing the parade, residents would take the train back to the Briarcliff Lodge and have a lovely meal.
By the 1950’s and 60’s, Thanksgiving recipes were regularly printed in women’s magazines and there was somewhat more consistency in what people cooked for Thanksgiving. Stuffing mixes, cranberry sauce in a can, jello molds, canned green beans and marshmallows found their way into the Thanksgiving ritual.

Betty Moyer of Briarcliff remembers growing up in Briarcliff and the Thanksgivings her family shared in the 1960’s and 1970’s.  Unlike some other towns, Briarcliff did not have a Thanksgiving Day football rivalry with another town. So folks spent the day with their own family. “We have a large family and in between dinner and dessert we would play touch football on the fields at King’s College.”   Her mother would forage for bittersweet along the roadsides in Briarcliff, which she would wind around pumpkins for the centerpiece of her table.   Their dinner was the “typical” Thanksgiving spread:  turkey, stuffing, cranberry sauce and pies.  Her mother made her own special version of sweet potatoes, which included orange juice.  Betty’s own children grew up in Briarcliff as well and she remembers that the schools and churches would collect food items and give them to the food pantry.

It doesn’t matter if your Thanksgiving meal is simple or elaborate, authentic or creative.  So what if you just have to have a large pan of lasagna along with the turkey.  Sharing a meal with an overarching awareness of gratitude is exactly what Walter Law, who founded Briarcliff Manor, would have revelled in. He stated:  “I have strong conviction that with the golden rule always in the ascendant, Briarcliff Manor will go on to increase in numbers and moral power, each member of it as one happy family, filled with charity and thoughtful consideration for his neighbor.”

Happy Thanksgiving to the entire Briarcliff family and our neighbors.