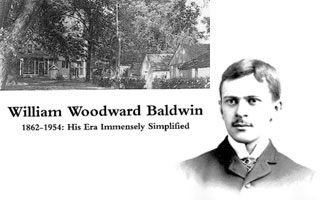 The Briarcliff Manor-Scarborough Historical Society has announced its annual post-holiday gathering at the Briarcliff Library Center on Sunday January 6th at 2 pm. In addition to eggnog, wine and special seasonal goodies, Mrs. Patricia Woodward Andrews and her grandson, Robert Oehrig, will present a unique and compelling look at Village history through the extraordinary lens of their grandfather and great-grandfather. William Woodward Baldwin, Baltimore native and attorney, lived in Briarcliff Manor for nearly 30 years while working in New York, from 1897 through 1926.

His remarkable career included a stint as third U.S. Undersecretary of State, handling business for notables like Mark Twain, and regular visits with President Grover Cleveland in Washington. Concurrently, he became a friend and business associate of Walter W. Law, Briarcliff’s founder.

Mr. Baldwin kept copious and detailed notes, commentary and letters throughout his life, including personal comments about his years in Briarcliff. This treasure trove of historical material was eventually unearthed by his granddaughter long after his death. She has put it all into a first-person narrative and published the book, “William Woodward Baldwin 1862-1954: An Era Immensely Simplified.”

Mrs. Baldwin Andrews and Mr. Oehrig will be the Society’s guests of honor at the party. They will discuss Mr. Baldwin’s early years in both Briarcliff and Baltimore. They will also sign books after the discussion and answer questions about his life and times in Briarcliff and beyond.

The book includes photographs, letters, verse, and more than 40 down-home recipes collected during Mr. Baldwin’s retirement in Maryland. But the truly gripping attraction of the volume is its first-person “voice.” Whether explaining Civil War years in Baltimore as a child or describing Walter Law’s interview at W&J Sloane carpet Company, you feel it’s happening right now.

This is particularly true in the Briarcliff years. He talks at length about the “Put” — the Putnam Division of the NY Central. There is also a detailed profile of Mr. Law’s early days as an immigrant in our country. This includes information believed to be new and original. Attendees at the January 6th party will learn far more about those early days.

All are welcome to attend the party. The Society does respectfully request, however, that in order to provide adequate space and refreshments for all, you call 941-4393 as soon as possible and tell them you will attend. It promises to be a very special occasion.