Briarcliff Manor’s 5th Annual Harvest Festival took place this past weekend and the event, which featured a number of new attractions this year, was a success according to residents, participating businesses and organizers of the event.

The Harvest Festival is an annual event sponsored by the Briarcliff Manor Chamber of Commerce to promote local business. 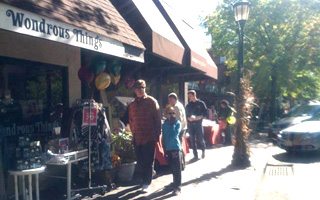 “This year was probably the most traffic we’ve had, and it was constant,” said Donald Borho, one of the directors of the Briarcliff Manor Chamber of Commerce.

“And it wasn’t in spurts or waves, there was a steady flow of people on the sidewalks all day. It was packed from the time we started at 10 a.m. until 5 or 6 p.m.” Borho, who’s also an owner of Wondrous Things, said the event has expanded a bit over the past five years, largely, to include activities for children.

Some of these attractions include face painting, a bouncy castle and a petting zoo, as in years past, with the addition of a stilt walker and pony rides this year. Borho said these stations were interspersed throughout the Village to increase foot-traffic and encourage people to walk through the entire festival, visiting different stations and tables. 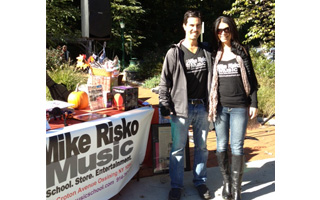 Borho commented on how the benefits extend beyond the increased foot traffic for the day, by introducing new customers to the area and raising awareness of the participating businesses.  Borho said that he’ll often spot a new face at the festival, and then see them again shopping for the holidays.

Michael and Miriam Risko, owners of the Mike Risko Music School, provided live music and ran the stage all day. Miriam Risko, who opened the music school with her husband Michael Risko in 1995, was glad to participate. “We’ve been working with the Briarcliff Manor Chamber of Commerce for years. Our business is located in Ossining, but we draw students from many of the surrounding areas. Briarcliff has really embraced us and we feel like a part of the town. It was just a nice event to participate in,” she said.

The Mike Risko Band, as well as a number of the music school’s students from Briarcliff and Ossining, performed at the event. The great part, according Miriam Risko, was that they played in the Pocket Park right in the middle of the festival, so cars driving by could hear the music throughout the entire street. “It was like a drive-by concert!” she said.

Miriam Risko added that participating in Briarcliff’s annual festivals gives them a chance to meet other people in the community and puts them somewhere they wouldn’t usually be, in this case, the middle of Briarcliff’s main street. “Because we are a part of many different communities it’s nice to be able to bridge that gap and have friends and customers from different areas come to the event,” Miriam Risko said.

Borho, who moved to Briarcliff in the 1960’s, said he’s witnessed tremendous changes in the Village over the decades.  “But it still does have that nice, small town feel,” Borho said.