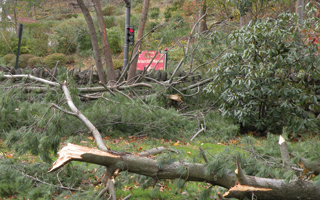 Betty Moyer could feel the alarm rising from her stomach as the terrifyingly high winds were howling and lawn debris was hurling sideways outside the window.  She couldn’t make up her mind whether to stay in the house with three of her five grown children or to make her way to her friend Elaine’s house two miles away.  The loud crashing sound of trees hitting the house helped her decide in an instant, and she flew out of the house and into a car with her daughters Betty and Susan.

Her son John led the way in his car.  As Betty slowly drove through the unlit back roads in Briarcliff, she wasn’t sure she had made the right decision. Massive trees were uprooted and lay shattered and defeated across the road. Power lines lay exposed and uncertain, threatening to startle and strike an unwary traveler.  Betty felt like she was in a video game, swerving and negotiating an obstacle course on a difficult level.  They arrived at Elaine’s and Betty finally felt safe for the first time that night.  It wasn’t that Elaine’s house was any safer, but the
reassurance and company of her old and dear friend helped Betty weather the storm. 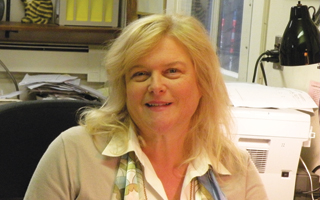 Betty is a lifetime resident of Briarcliff Manor and it is no surprise that she has many close friends in the community.  She is one of ten children and attended St. Theresa’s School as a child. She graduated from Briarcliff Manor High School in 1975 and after graduation she went to Villanova Nursing School. Betty married  Dr. Jeffrey Moyer (Briarcliff High class of 74’) and together they opened The Briarcliff Animal Hospital in 1994.

Betty feels very grateful for growing up and living in Briarcliff. She feels strongly that the quality of the Briarcliff schools were responsible for subsequent success of all of her 10 brothers and sisters.  Her high school class is still so close that they meet every five years for a reunion at the Sleepy Hollow Country Club.  She loves the fact that Briarcliff is so close to the Hudson River and that the landscape of the town is so beautiful.  She remembers skating on the King’s College pond and constantly playing sports with neighborhood kids on the fields around town. “Back then,” she said, “people had much larger families than they do now and there were always kids outside playing.”  Her Grandmother remembers going to the Olympics when they were held at Briarcliff Lodge in the 1920’s.  The Lodge later became King’s College. Betty is just one of those very lucky people who has many friends and family who love her, and she has deep, deep, roots in the community. No Hurricane Sandy or other storm could ever yank those roots out of the ground. Her friends will make sure of that. 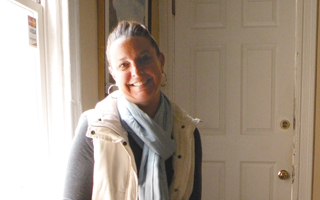 Jodi Mercedes is a safe haven in a storm, she also owns a safe haven in Briarcliff.  Jodie, a lifetime resident of Briarcliff Manor owns The Haven Day Spa. Hurricane Sandy left most of Briarcliff Manor in the dark and that included Jodi’s home. A single mother of three children, Jodi found refuge at The Haven which did not lose its power. She and her youngest son, Nicholas, found themselves sleeping on the massage tables at the Spa during the storm. Things could have been worse. The Haven Spa is located in a charming old house. It has none of the slick merchandising and department store feeling so many of the spas have. It is homey and peaceful and always smells delicious. Jodi has truly created a place where people feel that they can just be themselves.  The spa is a reflection of Jodi herself. Having gone through a difficult divorce, Jodi created The Haven Spa out of nothing. It has provided a place of peace, relaxation and wellness not only for her clients but for herself as well. The Haven Spa has been in business for 16 years and has provided Jodi the independence to raise her children in Briarcliff Manor. She herself grew up in Briarcliff and graduated from Briarcliff High School in 1984. She feels as though the community has given her a great deal of support and really believes that Briarcliff Manor is a great place to raise children.  She is grateful for how friendly the townspeople are and how everyone looks out after one another. As a mother and a business owner it is the quality of her relationships she most cherishes. Briarcliff Manor is a small and nourishing Village, and for a single mother she finds that it provides her with everything she needs.  Phelps hospital is minutes away as well as an assortment of good doctors and dentists. Jodi is a beautiful, independent, courageous, funny and down-to-earth person.  Her eyes sparkle when she talks to you. She makes everyone she meets feel welcome and accepted for who they are. Just the kind of safe haven we are all grateful for.

Briarcliff Manor has never seen anything quite like Hurricane Sandy. There was Hurricane Floyd in 1999, which wiped out the bridge on South State Road and more than one snow storm that shut down the town for a day or two. The damage to trees and property is devastating. One family had three large trees crash into their house, and they will have to move to a rental home for several months as repairs to the house are made. I had a 65-foot, 100-year old fir tree blow over and take part of my driveway with it. The Briarcliff campus of Pace University had to be evacuated to its main campus in Pleasantville when its back-up
generators failed. The problem compounded as gas became scarce, and banks and ATMs were closed as was the post office. Some local dog kennels were without power and hotel rooms were almost non-existent.  With few homes having electricity and heat, the Village of Briarcliff rallied to take care of one another.

Neighbors checked on each other. My neighbor David called, texted and e-mailed me, figuring something would go through, to say there was suspicious smoke coming out of my house. It turned out I had arisen very early in the morning and started a big fire in my fireplace, but I was really gratefully that he paid attention and was looking out for us. Wondorous Things, a boutique in the Village, e-mailed everyone offering free phone charging in their store. The Moonbean Café offered free wi-fi and the library became a hub of activity with heat, wi-fi and phone charging. The fire department offered the same, as well as a warming station. They also showed free movies for different age groups to keep kids of all ages entertained. Club Fit, the large and prominent health and fitness club in Briarcliff, was packed day and night with
people who, amongst other things, needed a hot shower. The lines to the showers were as long as 15 people at one time. On recognizing the importance of their role in helping the people of Briarcliff, Club Fit generously opened its doors to everyone, not just members, who needed to get warm and take a shower. You just had to bring your own towel!  The entire Village seemed to leave their homes and drive or walk downtown. Teens were hanging out; people were everywhere. With no electronic entertainment to sequester them, everyone was interacting. There were storm stories to share and warmth to be enjoyed. As one person noted, “It seemed like Christmas.”  The big surprise was how cordial and friendly everyone was towards each other while under such duress. This however, was not the same at the gas lines. I don’t know how cordial everyone was there!  Dare I say it felt like a hurricane holiday. There was a suspension of the norm. Kids were not in school, adults found it difficult to work, and so, went shopping or ate at restaurants or went for walks.

Thanksgiving is just around the corner.  This year, when everyone goes around the Thanksgiving table and states what they are thankful for, I can imagine that the responses will be more conscious, deeper and more heartfelt than in years past. I used to think that I was entitled to my morning cup of coffee, my hot shower, and my clean clothes. If I am honest, I also felt entitled to charged electronics, ATMs, gas and stamps. After all, I work hard and pay taxes.  The truth is, these are all extraordinary gifts and privileges, not rights. They can be gone in the wake of a storm. Having travelled to India this past year and volunteered in a rural school I can add that shoes, toilets, glasses, garbage trucks, clean water, medicine, privacy and silence are all gifts as well. We have all been humbled by Sandy and this is not a bad thing.  We get by with a little help from each other and I am grateful for being reminded of this.