Last year, The Tarrytown Music Hall Executive Director, Björn Olsson, had an idea to create an academy that would teach kids about the theater. Not just as a way to train budding thespians, but as a way to help children use performing to practice public speaking, gain confidence, and learn vital life skills.  His goal was to use the entire theater as a large, theatrical classroom. To have kids be very comfortable going to the Music Hall and consider it their artistic home. So, The Music Hall Academy was born.

Björn hired Peter Royston to be the Academy’s first Director. Peter has been working in theater education in the River Towns, including the Sleepy Hollow school district, for the past 15 years. He’s also written over 50 study guides for Broadway, Off-Broadway, and touring productions and co-founded Broadway Classroom, the educational theater program for Broadway.com.
“I’ve been working with such a wide-variety of ages, different grades, over the years,” said Royston, “that I took all that experience and decided the Academy was going to be the home for that.”

This past summer, The Academy had seven week-long workshops for close to 100 students. The workshops included musical theater week, stage combat week, and a week where kids created their own plays based on stories and legends like Little Red Riding Hood and The Odyssey. The other three weeks were dedicated to staging A Midsummer Night’s Dream. Kids had the option of attending as many or as few weeks as they liked. Many kept coming back for multiple weeks. 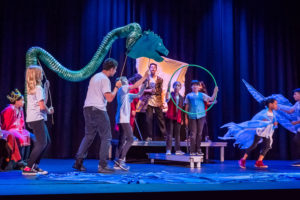 “I’m very happily surprised to find that kids are coming from all over to attend the Academy,” noted Royston. “We have kids from Ardsley, Greenburgh, and Ossining. We even had several kids from Windward School in White Plains. They love being in the theater, they love hanging out and absorbing everything about it.”

After successful Summer and Fall sessions, The Music Hall Academy is gearing up for their Spring programs which start in February. For the Spring session, the Academy will offer scholarships and partial scholarships for families who might need financial aid to send their child to the Academy.

For the full Music Hall Academy schedule of programs for the Spring – including a series of one-day programs for children and adults – visit www.tarrytownmusichall.org/academy.