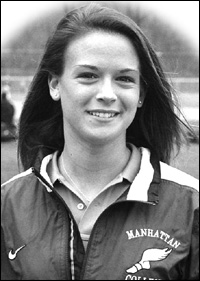 Amy Colantuono is 19 years old and presently a sophomore at Manhattan College, in Riverdale, New York. She is an Honor Student and a sprinter on the elite Manhattan College Track and Field Team, which has won 10 consecutive Men’s and Women’s Metro Atlantic Athletic Conference (MAAC) Indoor Championships from 1997-2006.

Colantuono, a native of Tarrytown, graduated from Irvington High School with Academic Honors and an impressive resumé of athletic awards, before progressing to Manhattan. She grew up in a family of three siblings as the only girl with two older twin brothers, Michael and Patrick. Amy’s education progressed through Dows Lane Elementary School, Irvington Middle School and eventually she graduated from Irvington High School in June 2004, with Honors. While attending Irvington Middle School, she was introduced to the sport of Track and Field by Track Coach Gina Maher. Under her guidance, Colantuono excelled in sprinting, and she mastered the 100 and 200 meter events. She also ran on the 4 x 100 and 4 x 400 meter relay teams.

"Amy ran varsity as an eighth grader and was one of the better runners on the team. By her freshman year, Amy was definitely the best sprinter on the team. She displayed such poise. Amy just got better every year," said Coach Maher, who is completing her 20th season at Irvington H.S.

Colantuono was named the captain of the Bulldogs Girls Track Team during her sophomore, junior and senior years. Her 4×100-relay team still holds the school record time for the Bulldogs!

In addition, she was voted the Girls Track Team’s Most Valuable Player, in her junior and senior years, and achieved All-League Honors five years consecutively. "High school was a great experience for me. I learned a lot and I grew into a leader. I learned a lot from my coaches and from the older athletes, while having the opportunity early in life to play on advanced teams," Amy noted.

She was named Irvington’s 2004 Female Athlete of the Year. She also received mention in the 2003-04 edition of Who’s Who in Sports!

At Manhattan College, Colantuono has continued her academic and athletic proficiency. In March she was inducted, as a sophomore, into the Kappa Delta Phi Education Honor Society. Colantuono was a "walk-on" (non-scholarship) sprinter for the Jaspers Women’s Track Team during her freshman year. Her ability to compete in college Division One competition enabled her to receive a three-year scholarship in her sophomore year. Recently she and her teammates thrilled local fans by winning the 4 x 400 relay to seal the 2006 MAAC Women’s Indoor Championship for the Jaspers!

Amy’s father, Michael Sr., is the Head Mechanic for the Village of Irvington. Her mother, Eileen, also works for the Village of Irvington in the Accounts Payable Department in Village Hall. This past January, they celebrated their 25th wedding anniversary. "We are extremely proud of Amy. We were there when she ran in the relay and captured the Indoor MAAC Championship this year," her mother said. "It was intense!"

About the Author: Albert Coqueran