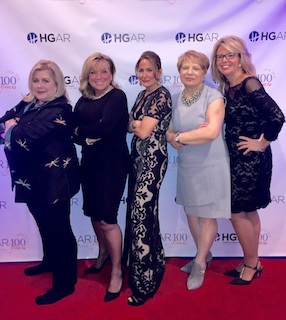 For Marcene Hedayati (Lic. RE Principal Broker/Owner) of William Raveis Legends Realty Group the story about how she came to acquire those titles in parentheses, has evolved over time. She had “retired herself out of retail,” after owning seven franchise Benetton stores in and around Boston. She had a son and daughter to raise, and when she relocated to the Tarrytown area her realtor asked if she could work answering the phones in the office. “I fell in love with Real Estate and got my license shortly after that.”

With her real estate license Marcene went on to become a top-producing agent for the next five years. “Even though I did very well as a real estate agent I knew that I was gravitating towards management which was a goal of mine,” she said. In essence, she was ready to start her own business once again, and in 2006 her intent became known to other real estate agents with similar aspirations.

Mary Case Friedner had been thinking about “creating the perfect real estate company with a great company culture” about the same time that Marcene Hedayati had. The two met and their conversation sparked Mary reaching out to Elvira Aloia with whom she worked, and the momentum carried over into a meeting with Phyllis Lerner and Karen Stroub. “The four of us, over a several-week period, met together with Marcene and the rest became history,” Mary stated. The perfect name for the company had to be unique, and according to Mary, it was she who came up with the Legends Realty Group. “It was a perfect play on words, being in the Land of Legends and having legendary agents in our community,” she added.

Karen Stroub succinctly stated the Company’s goals. “We wanted a company that was passionate and dedicated to surpassing the industry standards in all Real Estate endeavors. We wanted to empower our agents by providing a collaborative environment with unique opportunities.”

Phyllis Lerner enhanced the Company’s growth by adding offices in Briarcliff Manor, Tarrytown, Irvington and Hastings. “It has been amazing. We had realized early on that we needed to be competitive with technology, and being a small company that was not something we could achieve alone,” she said. In 2010 Legends affiliated with a larger company, William Raveis, that Marcene had known from previous work. When she contacted Raveis they responded within 24 hours, and so began the Legends Realty affiliation with William Raveis, which has provided all the technical support big companies offer.  It has worked out very well for Legends Realty, which remained an independent company through their franchise affiliation with William Raveis.

Elvira Aloia has known of the importance of technical support and added, “The new state of the Real Estate market finds people searching online before even contacting a realtor. We wanted to make sure we were up to date with all the latest technology and trends about how people search for homes. We wanted people to know we were still a local firm, but that we now had the tools of a larger corporation. We wanted the best of both worlds.”

When asked, Marcene, Mary, Phyllis, Karen and Elvira answered one question in unison. Where are most of the homebuyers coming from? The borough of Brooklyn was at the top of the chart with Queens a-not-too-distant second. What types of homes see the most activity with regard to location and price?  The owners answered, village homes within walking distance of amenities and the train station. The hottest-selling homes dollar-wise range from $500,000 to $800,000. Homes over the $1M mark do sell, however, not as quickly. Regarding the existing inventory of homes for sale in the Rivertowns, the word on the tip of their tongues was, slim. Inventory is simply low. Marcene Hedayati was quick to point out that her agency is also involved in rentals that range from one-bedroom apartments to entire homes.

Real Estate in the Rivertowns is, and has been even during the downward turn in the not-too-distant past, a thriving business and the appeal of the communities that this publication serves is stronger than ever. Regardless of whether one is a seller, buyer or renter, they will want to be represented by a real estate agent who has “true expertise and talent” along with being trustworthy and easy to work with.

Marcene Hedayati, Mary Case Friedner, Phyllis Lerner, Elvira Aloia and Karen Stroub of William Raveis Legends Realty Group make up a total of 71 real estate agents who believe in the service they provide and the work environment they foster. The agency came together through the efforts of like-minded women and it has prospered through their continued dedication to partnership, professionalism and performance.