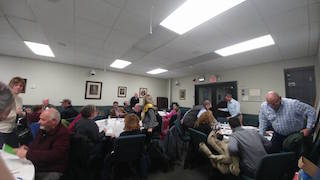 Irvington’s 2017 Comprehensive Plan is underway. The committee had its first meeting with the public to discuss the process of the 2017 plan update in mid-February. In an effort to involve Irvington residents, the committee has been delegated into five Working Groups, each with its own general range of issues, and will be comprised of residents ready to work through those issues and potentially come up with solutions.

Larry Schopfer, Village Administrator, says he’s optimistic. He says the 2017 plan will not be created completely from scratch, but instead will serve as an “update” to Irvington’s most recent Comprehensive Plan, created in 2003.

“The world has changed a lot,” Schopfer adds. This sentiment, was reiterated when the town’s planning consultant, Dave Smith, read out statistics to prove just that – citing a decline in the number of millennials in the area, an increase in diversity and the overall increase in the town’s population since 1980.

The room was filled with about 25 or so residents who were calm and listened intently as committee members spoke. Residents were given an introduction to the tasks at hand, letting them know in more detail what the five working groups are and what the responsibilities of each group could entail. The meeting played out like a more sophisticated, organized version of speed dating –  two committee members from each Working Group met with tables of residents, one at a time, to discuss the particular needs of each Working Group until the sound of Mr. Smith’s voice rang out in a “two-minute warning.”  Then they would switch.

After introductions and details were explained, residents were encouraged to have their say and ask their questions. And ask, they did. A few brows were raised as local hot button issues came up such as concerns about Airbnb and Uber in the community. Residents pointed out that Airbnb is a concern mainly because it could bring unwanted partying and noise into otherwise quiet neighborhoods. When the question was asked regarding what the DPW building could be used for, echoes of “parking” resounded and knowing looks were exchanged. Suggestions for types of parking garages weren’t lacking.

When the Downtown Working Group asked what kind of developments residents in the community might want to see go up, there were several interesting questions raised, such as:  How many nail salons do we currently have and do we want a Starbucks? Another topic of the night was the issue of re-usability of historic buildings in Irvington and the idea of keeping them historic while being able to implement new technologies such as solar energy.

The Broadway Corridor, that night called the “spine” of Irvington, has its very own Working Group, set with tasks such as keeping the “small town, open space feel” of the town in mind.  That group also discussed the idea of complete streets –  a term that was explained as the inclusion of sidewalks, bike lanes and parking on each side along with driving lanes. Then there was the question of whether Irvington has the room for this development.

All residents were told to not be shy in bringing up issues even if those issues were not listed on the night’s presentation, and to keep asking questions. “We want to bring in residents as much as possible. This won’t be top down. It will be bottom up,” urged Larry Schopfer.

The plan is currently set to stay on schedule to be completed by the end of the year. Any residents who could not attend can email Schopfer directly to get involved. The working groups will begin to meet and discuss issues within the coming weeks. The next public meeting, a preliminary public presentation of working group findings, will be held in June. The full presentation shown to residents can be found at www.irvingtonny.gov/