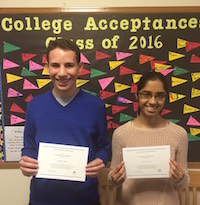 Irvington High School seniors Zachary Gallin and Sweta Narayan have been named finalists in the National Merit Scholarship Program. They are among 15,000 students nationwide who remain in the competition for 7,400 prestigious scholarships worth more than $32 million.

Gallin and Narayan advanced to the finals after submitting a scholarship application, demonstrating an outstanding academic record, writing an essay and earning SAT scores that confirmed their high performance on the qualifying Preliminary SAT/National Merit Scholarship Qualifying Test. They also needed to earn a recommendation from a high school official.

“Zachary and Sweta are outstanding students who excel in all aspects of school,” Principal David Cohen said. “They each take advantage of our most challenging courses, which include AP courses and Science Research.”

The two students entered the competition in 2014 when they, along with 1.5 million other juniors in about 22,000 high schools, took the qualifying test. Students with the highest scores were chosen to advance to the semifinals.

Besides academics, Gallin and Narayan are involved in various aspects of the school. Gallin is a member of the boys track team and the recipient of a prestigious scholarship award, given as part of the Experiment in International Living Leadership. He was also awarded an Innovation Fund grant this year to develop the Westchester Youth Gender Equality Conference, which will be held at Irvington High School on April 10. Narayan is a member of the Science Research and music performance programs at the high school.

The National Merit Scholarship Corporation will announce the winners in the spring.