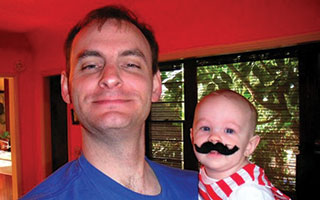 I’m a funny guy. I don’t just say that because I think I’m funny, I mean that I am actually, officially, a funny person. I studied comedy in college, took classes and worked in improvisational comedy for years, wrote a number of crowd-pleasing works of comedy for a theater back in Los Angeles, and in my senior year in high school placed third in the State of California for a humorous speech I wrote about punctuation.

Punctuation! I made punctuation funny! So naturally, I assumed that my genetic offspring would share my sense of humor. But for some reason, when I tried to explain the uproarious hilarity to be found in, say, one of Moliere’s comedies or a Feydeau farce, my nine- and seven-year old kids just stared at me stone-faced like I’d just asked them to do long division. But say the word “poop” around them and they’d laugh for days.

As a member of the local educational community, I have spent some time among unwashed masses of six-to-ten year olds, and I can report that the popularity of lowest-common-denominator humor runs rampant in this crowd. Something about basic bodily functions can reduce an otherwise calm child to fits of giggling. And the younger they are, the easier it is. It doesn’t even have to be an entire joke.

For example, here is a simulation of an actual conversation between two anonymous children. We’ll call them Child A and Child B.

Child B: Bursts out laughing.

Child A: Joins Child B in maniacal laughter. Farts.

This would win an Oscar for Best Adapted Screenplay at the Elementary School Academy Awards.

Now don’t get me wrong, I enjoy low-brow humor as much as the next elementary school-aged comedy aficionado. Some of Monty Python’s best bits include John Cleese walking funny or John Cleese listing off the name of every cheese in the universe or John Cleese screaming at everyone. Basically anything with John Cleese in it. I have also been known in the past to find great mirth in the antics of Beavis and Butthead – Cornholio, anyone? But even a 1990’s MTV show about a nose-picker and his scatalogically-named sidekick had a level of sophistication to it that the humor of today’s pre-tweens simply lacks.

So I carefully, yet surreptitiously, studied my children and their friends during a series of playdates, in an attempt to uncover why they derived their humor from the most mundane, and often icky, experiences, and what it might mean for their future. Why can I not offer my son some peanuts without him rolling on the floor, laughing (or ROFL for my younger readers)? Why is the #1 joke for the elementary set always a variation of:

What I learned is, well, you laugh at what you know.

When I see a LOLCats of a cat in a laundry basket with the caption “Wear something ELSE,” I laugh because my cats often curl up in the laundry basket, or on top of clothes that have been carefully laid out on the bed. I can relate.

When I watch a YouTube video of a screaming goat spliced into a Bon Jovi song, I laugh because that goat is just doing what we’ve all done late on a Saturday night while listening to Bon Jovi. I can relate.

When I view a fabulous farce dealing with a well-to-do aristocrat innocently winding up in the bed of his neighbor’s cousin’s daughter during an unexpected weekend in the country and being discovered by the stuttering butler who leaves before an explanation can be given, at the same time that his wife mistakes the gardener for the Sultan of Ishpashdeshi, after having a romantic tryst with her husband under the cover of darkness thinking he was actually her best friend’s lover’s hairdresser, I laugh because…actually, I should probably not say.

So what can seven-year olds relate to? I think you see where this is going.

When I filtered my horror at my kids’ bathroom humor with this new understanding, I was suddenly very relieved that they don’t find a bedroom farce all that funny. But they will at some point – they are just laughing at what they know.

So now, when an anonymous child puts their hand under their armpit and makes farting sounds, I try to laugh right along with them. And it’s not always easy, especially when the hand under the armpit was just moments ago covered in Nutella. But right now, I can’t expect them to understand why Seinfeld’s “The Contest” is possibly the funniest 30 minutes in television history. Their sense of humor has to and will evolve (or “devolve”) as they get older. And naturally I look forward to the day when I can sit down with my kids and watch Monty Python and the Holy Grail, but until then I’m more than satisfied to bear witness to their own comedic evolution.