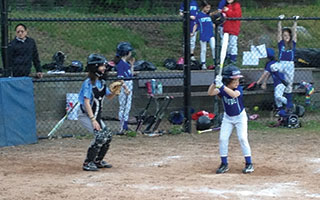 Baseball is a rough game: blazing 90-mile-an-hour fastballs leaving trails of smoke in their wake, runners barreling into the catcher to score a much-needed run, fights on the mound, line drives zeroing in on an infielder’s head. Every pitch is rife with possibilities, and the baseball coach plays through a million outcomes on every pitch, desperate to stay one step ahead of his competition.

At least that’s what they tell me. River Dad coaches first and second grade baseball players, so I wouldn’t really know.

Ours is a “teaching league.”  This means that everybody hits each inning. Nobody strikes out. All players play the field at all times, no matter how many there are. At the beginning of the game, the kids ask who we are “versing,” and at the end of our games the kids always ask us who won.  We always tell them that the games magically ended in a tie, though I think they may be catching on to us.

In my league, populated with six and seven-year olds, our games tend to last around 90 minutes. In those 90 minutes, each team generally comes to bat twice. That means they’re out in the field twice, and as coach, I try to give everyone a chance to play every position. If they played infield the first inning, I put them in the outfield in the second inning. Remember, it’s a teaching league, and the kids won’t learn if they don’t get a chance to try things out.

My older daughter plays softball, and is extremely pleased to be a Main Street Scoop because she heard a rumor that Main Street Sweets gives the team a free ice cream party at the end of every season. And now that rumor is in print, so it must be true.

Hers is also a teaching league, except they can strike out, and they can only have 10 players on the field in an inning. But you still have coaches pitching to their own teams, an inning ends either if the defense gets three outs or everyone in the lineup has batted (pretty much a 50/50 split at the moment), and a ground ball hit
directly to an infielder is more often than not a base hit.

In essence, the games are meant to teach children how to physically play the game. There will be time enough for sign stealing and dirty play and growing beards when they’re in middle and high school. Right now, everyone involved should be doing all they can to teach skills, nurture a love for the game and instill in all the spirit of sportsmanship.
Sadly, the sportsmanship side of the lesson gets lost every now and again.

Imagine my surprise when we play a team that puts all of their good, older players at the important positions in the first inning and keeps them there for the second inning. Nobody moves around, nobody gets a chance to try other things. The coach seems to be coaching specifically to win the game – and remember, it’s a game in which nobody is supposed to be keeping score.

Can you say “issues?”

We use ridiculously squishy baseballs in our league. They are the size of a regular baseball, but have an almost Nerf-like quality to them. This is because kids develop at different rates. We use these balls so that when a well-developed second grader drills a line drive off the head of a first grader who momentarily forgot that there was even a game going on, the first grader falls down and cries but is otherwise unharmed. If we were to use a regular baseball, that child would be sent to the hospital.

And yet there are coaches in my league who want to use the hardball. I get it, I really do. The squishy balls don’t go nearly as far when hit than the hardballs, and they don’t make the same, satisfying “thunk” sound when hit. But they don’t crack as many skulls, either. I think it’s a fair trade.

But my biggest pet peeve, the thing that makes me want to Hulk out and smash, is when coaches forget the purpose of these leagues and, to use a phrase my irritated wife came up with, “play to the error.”

Playing to the error means playing the game assuming the other team is bad and will make mistakes. Allow me to explain:

Playing TO the error is when the coach is screaming for the runner on second to go home the instant the ball is hit. That’s the coach of a bunch of little kids telling his or her players that the other team is so bad, they can’t throw the ball to the catcher without dropping it. That they KNOW an error will be made. And if by some miracle it’s a successful throw/catch, they just go back to where they came from.

Because you know what? They may well be right and a little girl or boy will make a wild throw, or be unable to catch the ball, but sending the runner in that situation is specifically insulting that child. It is telling them that you, the supposed adult, think they will fail.

River Dad, the shrink, says that this all stems from adults taking the games too seriously. You see these people all the time. Sometimes they are yellers, sometimes they just burn with a quiet fury and crazy eyes. The truth is: they wish they were playing. They know THEY’D make a good throw and get the runner out, or that THEY’D hit the ball into the outfield. To them I say, join an adult league and play your overly-competitive heart out. Leave the kids out of it.

Don’t get me angry.  You wouldn’t like me when I’m angry.