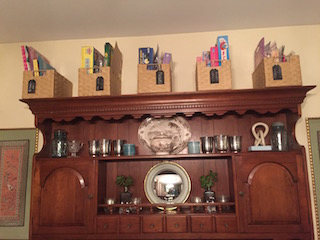 In the wake of the holidays, my home became something of a war zone. By three o’clock every afternoon, princess dresses littered the stairway, Legos crunched underfoot in the Living Room, and miniature pots, pans, and play food turned up in the strangest of spots, as my daughter took to hosting impromptu picnics with tiny tin dishes and a party’s worth of Barbies in attendance. You couldn’t walk through any area of our home without tripping over a toy, every inch of the couch was covered in stuffed animals, and we were all overwhelmed with the constant, never-ending cycle of “picking up.”

Every evening devolved into arguments, tears, and frustration all around, as there just didn’t seem to be any easy way to put it all away. If the task of picking all these toys up every day was daunting to a grown adult, how could we expect a three year old to manage it?  Something had to be done.  There were just TOO MANY TOYS, and we didn’t seem to have anywhere to put them. And while that’s an incredibly lucky issue to be dealing with, we did need to deal with it and get some order back into our home.

The first step to reining in the chaos was to decide just how much of our living space we were willing to devote to toys.  Given that my daughter’s favorite activity, and that of many of her friends, is to take out every toy she owns and dump it on the Living Room rug, I also had to determine just how many toys I could reasonably expect her to pick up on her own.  For my three- year- old, that meant one large basket’s worth of toys along with some pots, pans, and play food that is stored in her kid-sized kitchen.  While my daughter was at pre-school, I placed the six or seven toys she consistently reaches for in a designated Toy basket.  Everything else went into a clear plastic bin, which I promptly relegated to a shelf in the basement.  (I like the clear ones because you can see what’s at the very bottom.)  Now even when she dumps the entire toy basket out on the floor, as she and her playmates are wont to do, it’s not unreasonable to expect her to clean it all up, as it’s a much more manageable amount of stuff and it all gets put away in one place.

If she asks after one of the toys in the plastic bin, I always get it out for her, but she has to pick one of the toys already out to take its place in the bin.  We just keep rotating what’s on display in the Living Room toy basket, rather than having all of those toys readily accessible. I’ve noticed there are quite a few toys in the storage bin that have never been asked after, so we’ll likely take those to the Goodwill so other kids can enjoy them.

Once I had the toys in the Living Room down to a manageable scale, I moved on to her bedroom where the majority of her toys live.   As with anything else, the key to organizing toys is to sort Like with Like.  Following Lulu’s lead, I took out every toy she had in her room and dumped them all on the floor.  Then I grouped like items together so I could get a good sense of just how many My Little Ponies and “Frozen” dolls I was dealing with.   I found containers large enough to hold each category, with some extra space left in each one.   Ponies went in one basket, while all the matchbox cars went into a clear box and all the Smurf figurines went in another.   Lidless baskets work wonderfully for soft, pliable toys that can be tossed in any which way, while clear stackable plastic bins are great for what I call “tiny toys” or things that would otherwise fall to the bottom of a large basket or box.  The clear plastic allows you to see everything in the bin, and makes finding the piece or toy you’re looking for much easier, hopefully preventing what I call the “total dump.”  Whatever containers you choose, make sure they are easy for your child to pick up and move around and that you aren’t worried about them getting scratched, scuffed, or broken. 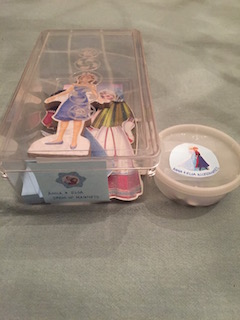 Once everything was sorted and in its container, I began the essential task of labeling. Without a label, the first time more than one toy gets taken out, the entire organization system can be lost.  To ensure your system stays in place, be sure to not only label the container that stores the toy, but the spot on the shelf or place in the cupboard where the container should live. This method of labeling ensures that you’ve not only created a container for every type of toy, but that every container has a dedicated home as well.

Labeling also takes the burden of cleaning up off the sole person who knows where everything goes (you), and makes picking up and putting things away much easier for a spouse, babysitter, or other children who are over to play.  If your child is too young to read, use photos on your labels to clearly mark what goes where, and you’ll find that even the youngest of kids can begin to pick up independently. If you’re hesitant to affix labels to furniture or places you keep toy containers, take a photo of the area when everything is in its place.  Then print a large copy of the photo and keep it in the cupboard or closet you’ve organized so others can refer to it.

Once you have toys contained in a manageable way, it’s wise to make sure kids understand the new storage system and know how to maintain it. I gave my daughter a “tour” of where and how we now store her toys, and I created a very basic chore chart for her to check off each afternoon when picking up her things.  She needed my help the first few afternoons, but quickly caught on to where everything goes thanks to the picture labels I affixed to all the storage containers. A chore chart can provide kids a sense of ownership and accountability for their things, and Lulu seems to get a real sense of accomplishment from checking the boxes off on her list. And while for a preschooler, just picking up after himself may be an accomplishment in and of itself, older children’s charts can easily extend to running the vacuum and dusting their playspace every few days. When a routine is established and kids have a clear idea of their responsibilities in keeping their playspaces tidy and in order, it’s much easier to keep the system up and running.  And that kind of toy organization is the ultimate goal!

Kitty Burruss is an interior designer and author of the decorating blog www.WestchesterDecorator.blogspot.com.