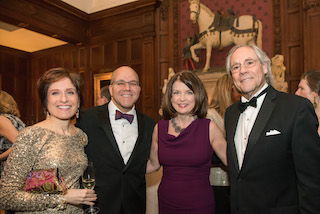 Phelps Hospital was recently honored by the Friends of the Rockefeller State Park Preserve at a gala held at the Rockefeller estate Playhouse, a Normandy-English style building designed by Duncan Candler in 1927. Daniel Blum, President and CEO of Phelps Hospital, was on hand to accept an award recognizing Phelps’ longstanding support of the Friends.

Photo: Phelps Hospital President & CEO Daniel Blum and his wife, Tracey, center, are joined by comedian Robert Klein, who served as Master of Ceremonies at the Friends of the Rockefeller State Park Preserve gala, and Lisa Manuele of Manuele Management.

Phelps has long supported the Friends’ fundraising events, including their annual trail running races, peony celebration and equestrian events. The hospital’s relationship with the Rockefeller family dates back to the early 20th century. In fact, Phelps could not have opened in 1956 without their generous financial support.

Phelps Hospital’s campus is located in close proximity to the Rockefeller State Park Preserve. Mr. Blum commented, “The Preserve is a natural and cultural treasure, and the Friends have been a vital force that has enabled visitors to walk, run and ride safely on the famous carriage roads of the park preserve.  I am truly honored to be associated with this accomplishment and their ongoing goal of carriage road restoration. Both Phelps and the Friends place a high value on the health and well-being of our community.”