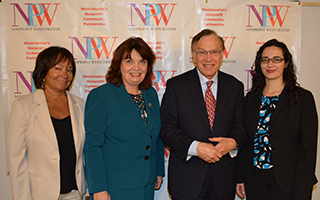 John Hopkins Study Concludes That Nonprofits Grew More Than Any Other Industries Over Last Decade. Nonprofits are a multi-billion dollar industry and make up the largest employment sector in Westchester County, according to a report released today by Nonprofit Westchester (NPW) and The Johns Hopkins Center for Civil Society Studies.

The study, entitled “Westchester County Nonprofits: A Major Economic Engine,” found that 53,987 people, or 13.6 percent, of the county’s total workforce is employed by nonprofits. That’s one out of every seven workers. Additionally, this sector generated $6.9 billion in revenues and paid roughly $2.7 billion in wages and compensation – including hundreds of millions in federal, state and local taxes.

“We’ve always known that we provide many essential services and are critically important to the regional economy,” said Joanna Straub, executive director of Nonprofit Westchester. “With this study, we have concrete data that shows just how vital we are and how much we contribute to Westchester County.”

The $15,000 study, funded by the Westchester Community Foundation, includes five major economic findings. They include:

The Westchester Community Foundation, which develops, manages and distributes philanthropic funds in a manner that is responsive to donor interests and community needs, funded the study because they believed it was important to show the wide economic reach and impact of nonprofits.

“It’s important that organizations, governments and members of the public understand the true value of nonprofits in Westchester County,” said Catherine Marsh, executive director of the Westchester Community Foundation. “These results show that nonprofits are not only respected service providers, but also create a wide range of economic opportunities.”

For more information about Nonprofit Westchester or to read a copy of the study, visit www.npwestchester.org or call 914-332-6679.

Nonprofit Westchester
Nonprofit Westchester (NPW) provides the nonprofit sector with a single unified voice for the role it plays in the economic vitality and sustainability of the county, focusing on sharing resources, connections, and information to strengthen Westchester in partnership with the for-profit and government sectors. The organization represents 95 501(c)(3) nonprofit organizations in the county under a cooperative mission to strengthen the impact, capacity and visibility of the nonprofit sector for a more just and caring community.  For more information, visit www.npwestchester.org.