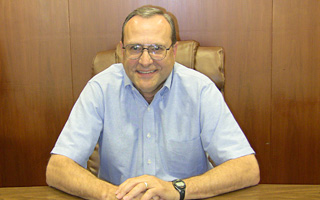 Briarcliff’s Mayor, Bill Vescio, has begun his fourth 2-year term and the service he has given to his Village dates back even further. Prior to being elected Mayor he spent one year as a Trustee, and prior to that, sixteen years on the Planning Board, six of which were as its Chairman.

Before that he was a member of Briarcliff’s Zoning Board. “It dawned on me during my recent nomination speech that I have over a quarter century of volunteering in the Village,” he said,  comfortably seated in Village Hall.  If Village service is meant to be a quick burst of energy and accomplishment followed by a return to the private sector, Bill Vescio defies that logic. Known affectionately as “Mr. Blunt” for his inability to mince words or take an indecisive stance on an important matter, Vescio is a study in the positive outcomes of commitment.

“My father was a patrolman who rose to being the Police Commissioner in Yonkers. He always encouraged me to make my own decisions and not to be afraid to do so. He knew that fear could be a motivator and it could be an inhibitor. He taught me that I had responsibilities and duties in life, that I had control over my destiny and to never second guess myself,” Vescio said.

Another integral part of the upbringing Bill Vescio received was that he must give back to the community. This, more than any other tenet of his father’s teachings, has guided him from youth into adulthood, from manhood to parenthood, and professionally into an extremely successful businessman. “To me Village government is a grass roots government and it is important because this is where it all starts. I feel very strongly about that and about volunteerism,” he noted. Volunteerism in Briarcliff means that its government is the only one in Westchester that neither receives a stipend nor health insurance. “I have actually fought against any stipend or paid benefits. As long as I am Mayor I don’t feel it is appropriate. This work is truly volunteer and altruistic. We are here to do the right thing without agendas,”  Vescio succinctly said. Briarcliff does not govern through political parties but rather through a caucus. The lack of Democratic or Republican slates dates back to 1902 when the caucus system was first adopted. “Candidates run under the caucus banner but they manage their own campaign,” he added. In essence the caucus is a vehicle to getting elected without a great deal of expense.

When asked what key areas he thought the Village of Briarcliff needed to address, Mayor Vescio mentioned three. “We are trying to preserve a lifestyle in Briarcliff that entails keeping services high and taxes low. In other words we need more bang for the buck. Secondly, we need to take care of Briarcliff not only today but also plan for the Village’s well-being in the future. We are a quiet community with large tracts of undeveloped land. If they are to be developed we need to do it in an organized manner. We need to let developers know that we are serious about keeping the character of the Village,” he said. Lastly, we need to continue completing projects and programs,” he added. Vescio holds a degree in Civil Engineering from NYU and sees himself as a navigator and consensus builder within Village government. He is not one to flounder and his navigational approach springs from a highly successful career in heavy construction as a highway contractor. He has worked on major infrastructure projects from Miami to Boston in addition to 32 bridges in Westchester County.  In 2000 he started his most recent business, LAWS Construction, which is an acronym for his children’s names (Lynda, Amy, Wendi and Steven). He is family man to the core and has made the Village of Briarcliff his extended family. That extended family may soon increase in size with the prospect of annexation currently being considered.

“Annexation is a side bar for the Village of Briarcliff. The real issue for us is the Town of Ossining. They provide no services to Briarcliff other than a tax assessor and the collection of taxes. I don’t know why Briarcliff gave up those services years ago but it did,” Vescio said. The Town of Ossining encompasses two villages [Briarcliff and Ossining] plus the unincorporated part. Briarcliff, which accounts for 23% of the total Town population, is paying 40% of the Town taxes and getting nothing in return. “I have had this pet peeve now for five years. The two Villages are providing quality services to their constituents at a reasonable cost and we are subsidizing an unincorporated part of the Town and we’re paying the bulk of the taxes. There is something wrong here, especially in today’s economy,” he said with conviction.

Presently Briarcliff’s goal is to become a co-terminus Village whereby Briarcliff can become its own Town/Village and shed the Town of Ossining. “We are unanimous in moving forward with this,” he added. Parallel with this objective is a portion of the unincorporated Town (districts 17&20) that have asked to be annexed by Briarcliff. The residents of these two districts would remain totally distinct from Briarcliff as far as the school system is concerned. They would however be entitled to police, fire protection (that they currently receive) and garbage collection. A study was done by Briarcliff that reflected a 17% reduction in the unincorporated taxes and a 2-3% reduction in taxes for the residents of Briarcliff. “These reductions will occur through the efficiency of services and the economy of size,” Vescio said.

“I firmly believe that the Town of Ossining government is not sustainable or economically viable. They cannot provide the necessary services and are actually shedding services such as the police [which now is provided by Westchester County]. We have assigned a date for this to be completed and we are looking to the Spring of 2012.”

If the past is an indicator of the future one thing is certain. The Village of Briarcliff, guided by the conviction and consensus-building of its Mayor and Trustees, intends  to set a goal and achieve it in a timely manner. By becoming a Town/Village Briarcliff will reduce its tax burden by streamlining efficiency in government. With that, another tenet of Bill Vescio’s father’s teaching will be put into play. Simply said, you control your destiny.