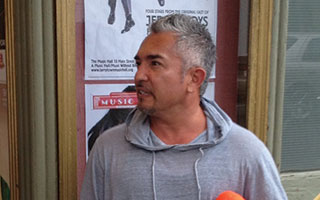 Recently Cesar Millan, “The Dog Whisperer” came to the Tarrytown Music Hall. I volunteer there and was present for his visit, which was awesome. He had one of his own dogs with him, and then did demonstrations with a few dogs from a local shelter that were excitable and needed some behavior modification before they could more easily be adopted. I try to be careful not to offend when I compare children to animals, but Cesar’s presentation brought home for me the general principles that work with both animal and child rearing. The struggles people have with their pets may not be exactly the same as they have with their children (replace begging at the table with whining in the supermarket), but the basic behavioral principles are the same. That’s why, since I don’t have children myself, I often revert to my experience with dogs, cats and horses as a way to put undesirable behavior in perspective.

Cesar Millan says, “I train people and rehabilitate dogs” because it is often not the dog that needs training, but the dog’s owner. We will do what we are allowed to get away with, and if a behavior is rewarded we are more likely to engage in that behavior again. If I feed my dog from the table; if I reward my cats for waking me up in the morning; if I allow a horse to misbehave–I have taught the animal that its behavior is acceptable, maybe even desirable, as it led to a reward. If you say “no” when children drop to the floor, throw tantrums, cry or otherwise wear you down so you give in and buy the Cocoa Puffs, Lego set, or whatever else is wanted, they have just learned that they can get what they wants by pushing you harder. My dog leaves me alone when I eat. But if I have a guest at the house, he will always test that person, coming around to the table, looking cute (and hungry). After a few minutes, unsatisfied, he’ll go somewhere else. He knows he’ll get nothing from me, but I can’t fault him for checking out a new person. I ride a horse who has a mischievous streak—not ever dangerous, but playful. I have actually seen him look across the ring, mischief in his eyes, see my trainer, and immediately appear change demeanor and become more focused since he knows that there will be a consequence with her if he acts silly, whereas he won’t be so sure what I will do if he misbehaves. This woman in her 70s has complete control over these large animals, so it must be something in her demeanor, since it is not size or strength.

One of the more difficult things in behavior modification is that it is hard to make changes once bad conduct is rewarded, whether directly or inadvertently. You have let your child get away with some action you’re not really crazy about and now it’s gotten to the point where you want to change it. Expect backlash. Not only will your child (or dog) be confused about why this is no longer acceptable, but he may get mad and keep fighting. As you should not accept behavior from a 10-pound puppy that you would not accept once that puppy has grown to 60 pounds, you also should think ahead to the time when your child is bigger than you and harder to control. My analogy to parents is usually along these lines: do you want to raise a child who flips you the bird when taking the car keys and walking out the door at 14 years old because it’s understood you can’t or haven’t any control? I can’t allow a 1000-pound animal to disobey me while I am on its back, or even my 30-pound beagle, whose lack of obedience may be dangerous if he runs off, knocks over a child, etc. The same principle applies in that you can’t allow your toddler to throw a tantrum resulting in a reward if you don’t want him doing that as an adolescent.

In the animal world, the person has to become the “alpha” in the pack. Why would a horse listen to a tiny person if not because he saw that person as an authority figure? In your family, the parent is the alpha. Sometimes setting limits for the sake of setting limits helps to set a tone. I have a candy dish in my office filled with Jolly Ranchers and the like. My rule is that each child can take two candies when they come to see me. There is no particular reason for the rule except that I feel that two candies is plenty, I want to teach moderation and limits, I don’t want to refill the bowl daily, and I don’t want to cause undue dental decay. Of course I get kids who want to bargain with me, “borrow” a candy from next session, or even try to sneak extras, but generally the rule is seen as reasonable and the children sometimes actually seem to enjoy the process of choosing only two, talking themselves through which flavors they like best, etc. I will never forget the child who came in with his mother due to behavioral problems. He was about nine years old and disrespectful of her space (crawling around, going into her purse, hanging on her), and wouldn’t listen at home. He thought nothing of going into her purse without permission if he wanted something, interrupting while we were talking, etc. He asked if he could have some candy and I told him that he could take one or two pieces, but the rule was no more than two. The mother immediately informed me that at home he could eat as much candy as he wanted. Needless to say I made note of this. This child had few, if any, limits set on him and Mom was now wondering why he wouldn’t listen. Why should he? He’s never been taught that there are consequences to not listening, or that there are limits. Of course, outside in the real world he will not be indulged like this, so how is he learning the skills he will need in school, relationships or employment?

In Cesar’s show he made his dog wait for a ball that was lying in front of him.  People in the audience encouraged him to let the poor dog have the ball, feeling bad that he was looking longingly at his toy. He explained that learning to wait is an exercise, and waiting does not mean five seconds, but means really waiting even when it is uncomfortable. I volunteer for ECAD (Educated Canine Assisting with Disabilities), an organization that trains dogs to help the disabled. My “job” is to reinforce their training and help socialize them if I take one home for a weekend. One of my pet peeves is dogs that rush their food bowls… this is not only rude, but if a child feeds the family dog and the dog digs in while the child’s hands are still there, he could inadvertently get bitten. I always work on this with the dogs I have in my care. I direct them to wait. If they rush the bowl, I tell them no and take it away. I do it again, maybe putting my hand between the dog and bowl, insisting they sit and wait. Within one or two meals dogs usually learn, “This lady won’t feed me if I’m rude, I have to wait.” My dog is also required to sit quietly before I tell him it’s OK to eat. Sometimes I put a cookie on the floor and tell him to leave it just to practice his self-control (Giuseppe is a therapy dog and must be obedient). With horses we sometimes make them trot in a circle or over a pole thrown on the ground simply to make sure they are listening to their riders and not just bounding around doing what they want. Being the alpha means sometimes simply saying, “I am going in this direction now for no other reason than because I said so,” or “set the table because I’m the mother.”

With animals, as with children, there should not be choices unless you can live with both outcomes. “Do you want string beans or broccoli?” is OK, but “Do you want a vegetable” may not be if eating greens is nonnegotiable. Too many parents ask their children questions today—“We are going to come back and see Dr. K on Monday, is that OK?” And what if the child says, “No, it’s not OK, I don’t like her!” then what? The parent is leading the child to believe she has a choice when really there may not be one. This is confusing to the child and does nothing in building discipline. Children, like puppies, need limits and structure or the world can be a scary place. In the absence of external structure they will create it themselves, which leads to children who try to steamroll over their parents, run a household and refuse to respond to requests. They wear their parents out and end up engaging in behaviors that can be dangerous or at the very least not tolerated in other settings such as school or on play dates. Much as an unruly dog is often the product of its training, so is an unruly child.

The bottom line is that we are all going to engage in spoiling sometimes, whether it is with a pet or a child. My dog lives a pretty nice life where he lounges on the couch with his cat buddies most of the day, gets long hikes in the park, treats, affection, and gets away with a few behaviors that maybe he shouldn’t. Many parents do a little spoiling too, and that’s OK. A LITTLE spoiling does not lead to unruly behavior, as long as there is structure and consistency otherwise. Cesar Millan’s beautiful pit bull sat obediently on the stage for his performance,unleashed and barely interested in what was going on around him, because he was disciplined. The dog recognized Cesar as the pack alpha. He left the ball alone because he knew that there would be follow through if he didn’t listen. I am certain that Cesar Millan’s dogs are loved and maybe a little spoiled from time to time, but they respect him and that makes a huge difference. We do not respect those in authority who don’t follow through. Horses play that game often, their little brains figuring out, “She will get tired before I do, so go ahead, just TRY to get me to do what I don’t want to.”  When the rider does get tired and gives up, the horse has ‘won.’  When the rider keeps going until the horse realizes it’s easier to do his job than play around, he has learned respect and discipline. That’s what you want with your kids—you want them to realize it’s easier to listen than to fight you. Not that I expect kids to happily clean their rooms or do their homework without ever whining or stomping their feet. But it should be a fleeting moment of disobedience. Grumble all you want, just do what your mother says anyway.

Just as I am responsible for my dog being a good pet, parents are accountable for raising children to be responsible adults, who can live happily in society, obey rules and carry out required job duties. No one likes spoiled adults, just as no one likes neighborhood dogs that run around misbehaving, jumping on people or taking children’s toys. No parent need be a prison warden, but teaching discipline and self-control goes a long way in raising happy, healthy people.