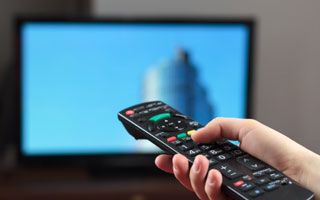 Andy Warhol predicted that in the future everyone would be famous for 15 minutes.  Judging by the circus side show that is now media, I’d say he was onto something.  Television stations that used to showcase plays, concerts, and highbrow foreign movies now bring us into people’s lives as they buy wedding dresses or whatever else they do.

The Learning Channel -The LEARNING Channel – is now a broadcaster of the weird and sad, so people can sit in their armchairs and laugh at them, while the exploited laugh all the way to the bank, making a fortune for misbehaving or being different.  Sounds like the network should change its name.

It was bound to happen.  We have become so full of input, with our 2000 television channels and our Facebooks and Twitters and constant stream of information, that in order to capture our attention, what is shown must be sensational in some way.  Just now I looked over the major headlines on the Huffington Post.  Dozens of headlines, dozens of superlatives.  Can everything really be so unsettling/appalling/unexpected/shocking?  Can every person out there be dealing with a nightmare/disgust/horror/the unexpected?  Is every statement controversial and every person either infamous or legendary?  What’s so sad is that when you actually click on the article, what is presented is so far from interesting, so far from news, that it seems like a joke.  Like one of those old Saturday Night Live commercial parodies where things were overdramatized for effect.  Is it any wonder with an election coming up that we can’t actually get to the real issues?  We overdramatize Lady Gaga’s weight gain and minimize the horrible economy.  Makes sense to me.

And actually, it does make sense.  In rough times, as the past decade has surely been, it is only natural to try to divert our attention elsewhere.  I have always believed that the Brady Bunch had its moment in large part because the country was struggling with Vietnam, Watergate, trouble in the Middle East, etc., and the Bradys, this perfectly blended family, could solve everything in 24 minutes.  Now we have a terrible worldwide economy, partisan politics that prevent anything from getting done, a healthcare crisis, wars we can’t pay for, terrorism threats, just bad news everywhere, and frankly, watching some kids get drunk and stupid on the beach for the cameras is easier than trying to sort through all that is going on outside our living rooms.  We watch people who are famous for simply being famous.  What exactly is it that the Kardashians do?  And why do we care?  Because they are rich and glamorous and love to be in the public eye, and if we watch them we don’t have to think about it when a journalist gets kidnapped and killed in a foreign country or how high the unemployment rate is.

But what does it do as we get trained to pair these sensational words with these irrelevant stories?  When we hear that some forgettable celebrity has done something “shocking” and we click on the article and find out she cut her hair or tried a new lipstick, do we become immune to those words when something really should be shocking?  Those of us well into adulthood grew up with real news, in real newspapers and on real televisions. What do the kids of today think is real news?  Yes, there are things to be shocked, distraught, or appalled by, but Justin Beiber’s hair is not one of them.

So, here we sit, going into an election during a time where our country, and the world, is struggling and in transition.  Because we can’t really fix the big problems, at least not easily, we shut our eyes to that and check out today’s latest side show.  After the first presidential debate the reaction was about Big Bird, not about the fact that questions went unanswered or that the problems are too big for one person to solve.  After Watergate came disco, I wonder what will come after this global recession.

The media can still be used for good.  I am plugged in a lot of the day, and I like being able to hear about news right away, and to have a forum to discuss or debate a current issue on a friend’s Facebook page, via email, etc.  If you miss something, you can alwys find it the next day on a site like You Tube.  As an animal lover I follow things about dog rescues and the like, and it’s great to see fundraising happen in cyberspace to pay for a rescue dog’s medical care, or the training of service dogs, or to help a sick person who may be down on his luck and need support while recuperating.   I fell in love with a reality docuseries called the Push Girls about a group of women in LA who are all in wheelchairs, and how they deal with day-to-day life, and what issues they do and don’t have due to their injuries.  It is a great show that can educate the able-bodied and inspire the disabled.  But as glamorous and gorgeous as they are, they got far less press than most other reality shows.  We run the risk of glossing over the difficult or unpleasant, skimming an article that is too long in favor of sound bites and superlatives.  It’s important, especially in the time in which we live, to sift through the noise to get to the real information, and then to try to objectively analyze the information.  Because that takes more effort than believing a sound bite, real news gets lost by the wayside.

Andy Warhol knew what he was talking about, and he winked at us as he painted soup cans and cereal boxes and mass produced silk screens of Jackie Onassis.  He knew where the world was going, and he could be left behind or he could help create a change and take it to the bank.  I only hope that at some point things turn around and people can live private lives again, and we grow bored of bad behavior being broadcast ad nauseum.  I hope that at some point a presidential debate doesn’t get reduced to whether or not one of the candidates likes Big Bird.