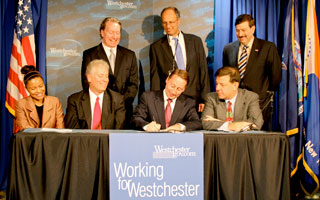 “Compromise” spending plan includes no increase in county tax levy; preserves essential services and protects the county’s AAA Credit ratings.
Just hours after it was approved unanimously by a bipartisan coalition of the Board of Legislators, County Executive Robert P. Astorino today signed a budget for 2013 that he said was a “responsible compromise” that includes no increase in the county property tax levy or any raiding of the county’s fund balance.

“This is a good, responsible  budget,” said Astorino. “While it has been modified from what I originally proposed, it meets all my objectives. There is no increase in the tax levy and there is no use of reserves that could jeopardize the county’s AAA credit ratings.”

The  $1.7 billion budget was approved 9-0 this afternoon by a coalition of seven Republicans and two Democrats. The remaining Democrats walked out of the Legislative Chambers.

Astorino said he was proud of the work of the bipartisan coalition that had drawn up the final budget. “This is what government should be about – people of all political sides working together to do right by the public.”

He singled out Democrats Michael Kaplowitz and Virginia Perez for their willingness to work with him, Republican Minority Leader Jim Maisano, Gordon Burrows and their Republican caucus.

“They have done what is right,” he said. “I am appalled at the actions of the other Democrats who walked out on this budget vote and literally shut the lights off to the chambers.. The will of the majority has to be respected. That’s the way our country operates.”

This is the third consecutive year that Astorino has initiated and signed budgets that have reduced or kept flat the county’s tax levy on property owners.

The final document signed differs in the following ways from the original proposal Astorino made Nov. 14:

“I can accept these changes,” said Astorino, “because the coalition made sure that it came up with a spending plan that did not raise taxes, did not under fund programs, did not hurt the county’s most needy  and did not in any way jeopardize the county’s three triple A bond ratings. I thank everyone for their hard work.”