I am not voting for David Carlucci for Congress.

Elected as a Democrat, Carlucci co-founded the IDC and for almost 8 years aligned himself with Republicans in exchange for power and perks. He and his IDC accomplices played a crucial role in blocking dozens of Democratic bills and efforts concerning common sense gun reforms, LGBTQIA liberties, environmental safeguards, reproductive freedom, bills to help immigrants and Dreamers, and millions of dollars in funding for our public schools, just to name a few.

He has been repeatedly asked about his involvement in the IDC, and every time, whether at Democrat committee meetings, public forums, on Zoom, in print and on social media, he has downplayed and denied the devastating impact his membership in the IDC had.

What makes his offenses particularly egregious is the game of smoke and mirrors he continues to play. When questioned, he claims he supported bills all along and points fingers at the Republicans for their failure.  What is not commonly known is that this co-founding member’s partnering with Republican leadership ensured those bills would never see the light of day in the first place. Carlucci knows it, yet is either unwilling or incapable of taking responsibility for betraying his constituents for 8 long years.

He continues to misrepresent his allegiances. How disgraceful to showcase a photo of himself standing next to members of Moms Demand Action (the grassroots movement fighting against gun violence) when he blocked the Extreme Risk Protection Order Act, which expands gun safety measures. How is he justified in labeling himself as a “leader in supporting women’s reproductive health rights” when he blocked the Reproductive Health Act and the Comprehensive Contraception Coverage Act?  How hypocritical to claim he stands with the LGBTQIA community when he blocked GENDA (Gender Expression Non-Discrimination Act).  The list goes on and on.

It is precisely his past that continues to be the news of today, as evidenced by numerous letters to the editor, op-ed pieces, and articles in local and national publications such as the Patch, the Wall Street Journal, American Prospect, City and State New York, and the Yonkers Tribune.

There are several qualified, worthy candidates running for Congress in District 17. Carlucci is not one of them.  He betrayed us once; he’ll do it again.  On June 23, please vote for a real Democrat. 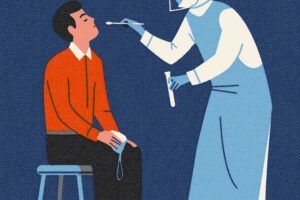 Letter to the Editor – Your Opinion on Covid Testing Wanted

Letter to the Editor: Looking for Angels