The election is over and the newly “elected” Irvington Trustees have been sworn in. However, we feel that the Irvington election was tainted by the actions of the very entity currently responsible for running our elections — The Westchester County Board of Elections.

A few years ago, Irvington abdicated responsibility for running their election to the County, due to the errors associated with the handling of just one (1) vote. It is our belief that we have moved from the frying pan and into the fire! In the recent Irvington election, as many as 290 votes were denied/lost because of the actions of the County Board of Elections. An argument can easily be made that a super majority of those votes would have gone to our team. With that said, we challenge the Mayor and Trustees to “take back” the election process from the County.

From our very first interaction with the County Board, our efforts were subverted. A County Board of Election Commissioner, Reginald Lafayette (also a Westchester County Party Chairman), when directly asked for advice on how to get onthe ballot, failed to inform us of additional necessary paperwork. We were denied access to the ballot as a result. After a long phone call discussing the lack of information, Mr. Lafayette said, “Take me to court, it is your word against mine.” We chose against dragging the Irvington election process into the courts (again).

As we prepared for our “write in” effort, we were guaranteed by the same Commissioner that all of the election inspectors for the Irvington election would be trained in the steps needed to assist voters to execute a “write- in” vote. Unfortunately for Irvington, inspectors were not properly trained and most were not even aware of how to advise a voter on how to do a “write-in” until many hours after the Polls opened. In fact, on election morning, when we called the County Board of Elections to alert them of the failure, one of same Commissioner’s assistants repeatedly hung up on us rather than work to assist the Village election. We learned the hard way that when a County Board of Election is responsible to run a Village election, there is no person appointed by the County to be responsible. This is contrary to a Village election process where the Village Clerk of Irvington would be the point person — and available to answer important questions.

We have received emails and letters from voters who were not given any assistance prior to entering the voting booth. Some were given incorrect information about executing a “write-in” (partly reflected in so many write- in votes for Francis Goudie for Village Justice). Scores of voters opened the curtain to ask a question and were told that the very action of opening the curtain negated their vote. In one polling station we were told by an inspector that there were at least 30 mis-votes due to lack of information or incorrect information.

Again, we ask the Mayor and Trustees of Irvington to “take back” the election process from the County.

Letter to the Editor: A Thanks to Congressman Jones

Letter to the Editor: Endorsement for Rob Melstein – Ossining School Board Candidate 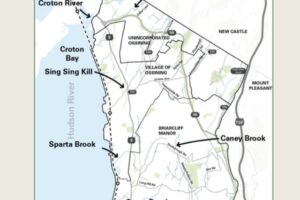 Letter to the Editor: Concern About Local Wetlands

About the Author: James McCann and Francis Goudie