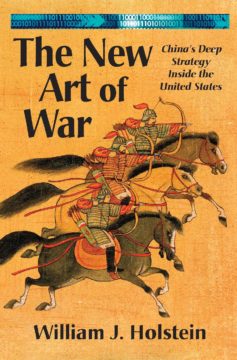 The United States and China seem to be poised on the edge of a deep trade and technological struggle. How did it happen and what does it mean?

Come to a talk by William J. Holstein, a Briarcliff Manor resident, who is author of the new book, “The New Art of War: China’s Deep Strategy Inside the United States.” Bill has been been involved in covering China as a journalist and author since being transferred to Hong Kong in January 1979 by United Press International. He later became Beijing bureau chief.

His book examines one aspect of Sino-American relations–precisely what different arms of the Chinese government are doing inside the United States to steal technology, penetrate governmental agencies and private corporations with spies, and collect massive amounts of data on individual Americans.