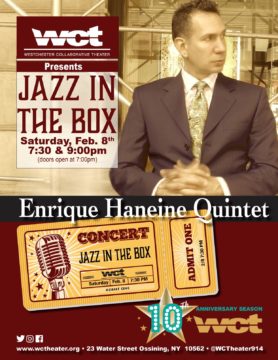 On Saturday, February 8, Westchester Collaborative Theater (WCT) kicks off its 2020 Jazz in the Box music series with internationally known, Grammy-nominated musician Enrique Haneine whose album, The Mind’s Mural, reached #1 on the NACC Top 30 Jazz Charts. Haneine and his band will be appearing for two sets at 7:30 and 9 pm. Accompanying Haneine on piano and Udo drum will be Christof Knoche on sax and bass clarinet, Pat Hall on trombone and euphonium, Jay Anderson acoustic bass and Diego Lopez on drums.

Once the music director for Ricky Martin, Haneine won the Jane Jarvis Jazz Competition, the All About Jazz New York’s Best 2005 Albums of the Year and was nominated for a Grammy for Best Latin Jazz album in 2013. A composer/pianist/drummer currently living in New York, Haneine has played at such major New York City venues as Jazz at Lincoln Center, Birdland, Sweet Rhythm, Nuyorican Poets Cafe, and Bowery Poetry Club and on stages at NYU, Pratt Institute, and Rockefeller University. He has also performed at The Kennedy Center for the Performing Arts and Blues Alley in DC and at music festivals worldwide.

Born in Mexico City of Lebanese descent, his music is founded in jazz, Latin and Lebanese traditions. Haneine has performed and collaborated alongside some of the greatest jazz musicians of our time, each of whom influenced and informed his unique personal style, a blend of innovative technique with uninhibited, intelligent improvisation. He holds master’s degrees in jazz piano performance from The Boston Conservatory and Berklee College of Music, is a faculty member at the Harbor Conservatory for the Performing Arts in Manhattan, and plays for the Alvin Ailey Dance Company’s Arts in Education program.

$20 event tickets can be purchased at:
https://www.brownpapertickets.com/event/4512711