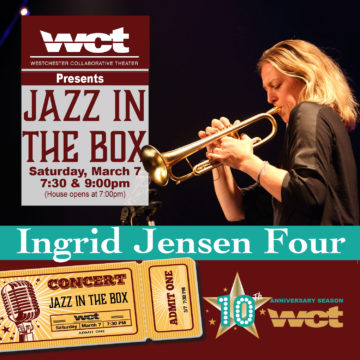 Ossining, NY – On Saturday, March 7, The Ingrid Jensen Four, a quartet of internationally acclaimed jazz virtuosos headed by trumpeter Jensen, will make a rare local appearance in Westchester Collaborative Theater (WCT)’s Jazz in the Box Series. Ossining-based Jensen, hailed by the JJA (Jazz Journalists Association) as 2019’s Trumpeter of the Year, is recognized as one of the most gifted trumpeters of her generation. Her quartet includes Nate Radley on guitar, Alex Smith (who has accompanied Lady Gaga and Tony Bennett) on keyboard, and Jon Wikan on drums.

Radley, also Ossining-based, has been called “A perceptive young guitarist with an introspective but assertive style” – Nate Chinen, New York Times. He is a guitarist and composer who leads his own group, performs with a variety of collaborative projects, and works as a sideman in numerous bands in the New York area and around the world.

Smith, a pianist, organist, composer, arranger, and educator is most widely known for his work accompanying Lady Gaga on her much-heralded performance of “The Star-Spangled Banner” for Super Bowl 50 (2016). He is the keyboardist and arranger for Lady Gaga’s jazz quintet and was featured on the Grammy-winning album with Tony Bennett’s “Cheek to Cheek” and on the PBS Special “Cheek to Cheek – Live!” which aired on October 24th, 2014.

From backing the most illustrious singers in the jazz idiom, to swinging hard in highly modern hard-hitting formats, drummer Wikan has created a niche for himself that makes him one of the most flexible and in demand drummers on the New York scene.
In addition to her quartet, Jensen leads her own quintet and organ trio. Her latest album, a release on the Whirlwind label, is a tribute to the late great Kenny Wheeler. “Invisible Sounds” (2018), featured on NPR’s Jazz Night in America and hosted by Christian McBride, has received critical acclaim. Jensen’s own bands’ glowing reviews have earned her a loyal fan base around the globe. A sought-after teacher, collaborator, and soloist, she was called “as versatile as she is vigorous” by the New York Times.