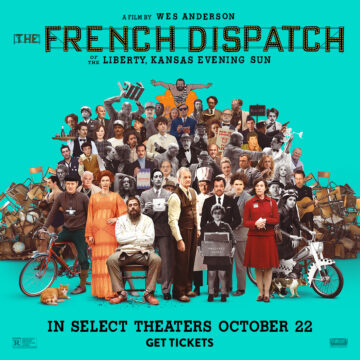 From Academy Award nominee Wes Anderson, and featuring a star-studded cast including Benicio del Toro, Adrien Brody, Tilda Swinton, Frances McDormand, Timothée Chalamet, Lyna Khoudri, Jeffrey Wright, Mathieu Amalric, Bill Murray, and Owen Wilson, The French Dispatch brings to life a collection of stories from the final issue of an American magazine published in a fictional 20th-century French city. On the occasion of the death of its beloved Kansas-born editor Arthur Howitzer, Jr., the staff of The French Dispatch, a widely circulated American magazine based in the French city of Ennui-sur-Blasé, convenes to write his obituary. Memories of Howitzer flow into the creation of four stories: a travelogue of the seediest sections of the city itself from The Cycling Reporter; “The Concrete Masterpiece,” about a criminally insane painter, his guard and muse, and his ravenous dealers; “Revisions to a Manifesto,” a chronicle of love and death on the barricades at the height of student revolt; and “The Private Dining Room of the Police Commissioner,” a suspenseful tale of drugs, kidnapping, and fine dining.