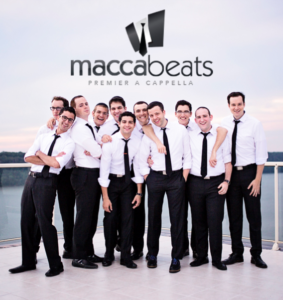 Often travelling with little more than the shirts on their backs and the ties on their necks, the Maccabeats have entertained and inspired hundreds of audiences worldwide, from Alabama to (New) Zealand and everywhere in between. Using nothing more than the human voice, a clean-cut presentation, and a little Jewish humor, this unique group of singers is able to connect with fans of all backgrounds and ages.

Originally formed in 2007 as Yeshiva University’s student vocal group, the Maccabeats have recently emerged as both Jewish music and a cappella phenomenon, with a large fanbase, more than 20 million views on YouTube, numerous TV appearances, and proven success with four albums, 2010′s Voices From The Heights, 2012′s Out Of The Box, 2014′s One Day More and 2015′s A Maccabeats Hanukkah. Though the Maccabeats aren’t your grandfather’s synagogue choir, their ideology and identity play an important part in what they do.
The Maccabeats’ unique offering has caught the eyes of numerous organizations and individuals throughout the world. They’ve played sold-out shows to thousands at JCCs, temples, synagogues, shuls, Chabads, Hillels, jazz clubs, festivals, conventions, and theaters across five continents and over thirty states and provinces. They’ve been invited to join reggae superstar Matisyahu and Jewish music superstar Yaakov Shwekey on stage. They’ve been invited to Gracie Mansion by NYC mayor Michael Bloomberg. And they’ve been invited to the White House by US President Barack Obama. Over the course of time, their adventures and opportunities imparted upon the Maccabeats an important lesson: with great a cappella comes great responsibility. It is with much humility and gratitude that the group take up the mission given to them, and share their music with the world.