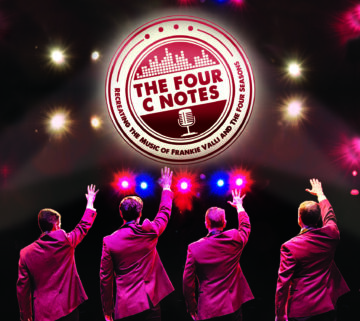 THE FOUR C NOTES, the Midwest’s only tribute group recreating the music of Frankie Valli and the Four Seasons, will debut the world premiere of their virtual concert in partnership with the White Plains Performing Arts Center on Sunday, November 15th, at 7:00 PM, EST.

THE FOUR C NOTES were created by New Rochelle native John Michael Coppola, most notably of the Chicago production of the Broadway smash Jersey Boys. The concert features many of the world-wide hits that made the group a household name, including “Oh What A Night”, “Sherry”, “Can’t Take My Eyes Off Of You”, “Let’s Hang On”, “Workin’ My Way Back to You” and many, many more!

“The group was born out of a request I received to create a 30-minute tribute for a wedding reception. I hired 3 friends of mine from the Chicago theater and music scene, and it sort of took off from there,” says Coppola. “It was as if the universe said ‘Yes! Go with that instinct’. That was in 2013, and since then, the show has grown to a full 90 minutes, and we’ve been busy ever since.”

Coppola is partnering with various venues around the country, to help boost their revenues while they largely remain closed due to the Covid-19 pandemic. “With the temporary absence of live performances, producing our full-length concert in digital form was a way to keep the music alive for our fans and co- presenting it with partner venues across the country offered us away to support their long-term viability.”

One of these venues is the White Plains Performing Arts Center.

“We’re thrilled to be partnering with THE FOUR C NOTES on the world premiere of their virtual concert” says Stephen Ferri, WPPAC’s Executive Producer. “We hope that being able to offer our audience this virtual concert, will be a way to bring in some revenue, while we continue to remain patient until we can offer live performances once again, and what better way than to do so with someone who grew up in the Westchester area!”.