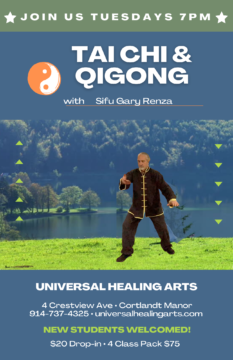 Tai Chi is a 4,000 year-old practice and one of the best known martial arts of the Internal systems from ancient China based on Qigong and Taoist principles. Tai Chi originates from qigong, a discipline that has its roots in traditional Chinese medicine.
​
Tai Chi is often referred to as “meditation in motion” and involves a series of slow, meditative body movements and is one of the most effective exercises for the health of mind and body. It promotes healing by integrating a meditative combination of movement, controlled breathing, sound, and visualization. Tai Chi can be easily integrated into your daily life.
​
Qigong (“Chee -gung”) is a way of cultivating and harnessing “life force” energy for health and healing, martial arts and peace of mind.

Benefits of Tai Chi and QiGong Practice
With proper instruction and regular practice, tai chi can be a positive part of an overall approach to improving your health.
​
Release joint pain
Release stress, anxiety and depression
Improved mood and quality of sleep
Improved immunity
Increased energy and stamina
Improved flexibility and balance
Improved muscle strength and definition
​
​
About Instructor Sifu Gary Renza
“Sifu Gary Renza has been actively involved in the Chinese healing and martial arts for the past 30 yrs. He has competed in numerous tournaments, is a published writer, lecturer, herbalist and one of the most sought after teachers in the tristate area. ​