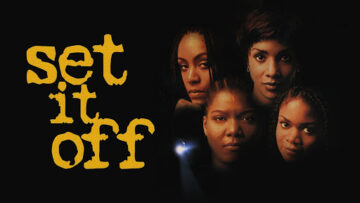 F. Gary Gray’s (Friday, Straight Outta Compton) mid-nineties masterpiece was often described as the “Black” Thelma & Louise upon release, but this multilayered crime drama defies easy categorization. Part heist thriller, unflinching and unapologetic race and class commentary, and loving tribute to the depths of Black female friendship, Set It Off is a thoughtful, angry, and endlessly engaging wild ride. Gray brought together an electric cast of rising stars, including Jada Pinkett Smith, Queen Latifah (in a career-making performance), Vivica A. Fox, and Kimberly Elise (in her debut) as a group of childhood friends from LA who resort to robbing banks in order to escape poverty. While initially successful, the women quickly become the target of an obsessive police detective who rushes to hunt them down. Set It Off celebrated its 25th Anniversary last year but so many of its themes and insights remain incredibly timely. Experience this classic of Black American cinema on the big screen (again or for the first time) this February. Set It Off screens as part of JBFC series REMIX: The Black Experience in Film, Media, and Art, which is presented with generous support from ArtsWestchester and the National Endowment for the Arts.