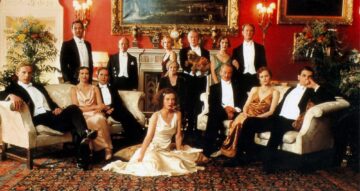 Chauffeur’s daughter Sabrina Fairchild (Audrey Hepburn, Funny Face) comes home from two years in Paris and immediately catches the attention of David (William Holden, Sunset Boulevard), the slacker, playboy son of her father’s rich employers. Sabrina, who has been in love with David her whole life, falls for his flirtations almost immediately. However, their relationship is threatened when she also develops feelings for David’s more serious older brother, Linus (Humphrey Bogart, Key Largo), who dutifully runs the family business and is relying on David to marry an heiress in order for a crucial merger to take place. Co-written and directed by Hollywood ace Billy Wilder (Some Like It Hot, The Apartment), and nominated for six Academy Awards—including Best Actress in a Leading Role and Best Director—the film won legendary costume designer Edith Head her sixth Oscar, out of the eight she would win throughout her career.

Sabrina screens as part of JBFC series Senior Afternoon Cinema, which is sponsored by The Knolls—A Bethel Community.