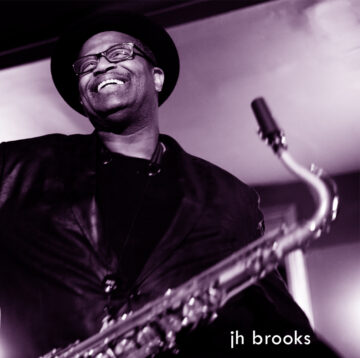 Tenor saxophonist Ray Blue is a veteran player with infectious sounds full of warmth, fire, and funk, at times. A composer and educator, as well as one of the most in-demand musicians in New York, Ray Blue is a soulful performer, a full-throated sax man with a fluid and lyrical style which makes his sound unique. Ray was inducted into the Blues Hall of Fame in 2013.

Living in Germany from 2000 to 2012, he performed and toured throughout Europe, Africa, and Asia. As a cast member of the Ray Charles Show touring company from 2008 to 2010, he performed in Germany, Switzerland, Austria, and Italy. He continues to perform internationally.
His 2020 release, Work, remained on the Jazz Week Chart for over two months, peaking at #7 while his holiday single, “Have Yourself a Merry Little Christmas,” topped off at #2.

“Ray Blue has a majestic presence…when playing, his sense of purpose is obvious. It’s one thing to be a good composer, it’s another to be a great performer. Ray Blue’s got the whole package.” ~​Jean Szlamowicz, Jazz Hot, Down Beat

This concert will be held on our outdoor stage or, in case of inclement weather, indoors. Bring a lawn chair and a picnic dinner if you’d like. Light refreshments will be available. Tickets are $20 and may be purchased at the door.