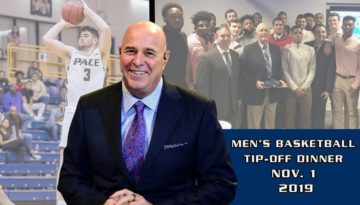 On Friday, November 1, the Pace University Men’s Basketball program invites you to attend the Fifth Annual Tip-Off Dinner to celebrate the start of the 2019-20 season. The event gives families, alumni, and supporters an opportunity to meet the team and coaches in advance of another exciting year of Pace Basketball. The dinner will be held at Tesoro D’Italia Ristorante in Pleasantville, New York at 7:00 p.m., just a few minutes from campus. Head Coach Matt Healing is thrilled to announce that this year’s keynote speaker will be former Division I Head Coach (Virginia Tech, South Florida, Long Beach State) and current ESPN College Basketball Analyst, Seth Greenberg.

Coach Greenberg joined ESPN in 2012 after 35 years of college coaching experience. At ESPN, he appears regularly on SportsCenter and College GameDay, while also co-hosting a weekly podcast on ESPN.com. Greenberg posted a record of 383-293 in his 22 years as a head coach including four wins against nationally ranked No. 1 teams. He has road wins at Allen Fieldhouse, Dean Dome and Cameron Indoor Stadium, and has secured 11 postseason appearances. He led the Virginia Tech Hokies for nine seasons (2003-12), where he was a two-time ACC Coach of the Year and reached the post-season six times. He is second on the school’s all-time wins list with a 170-123 record.

Tickets are $120 for adults and $60 for children (ages 12 & under) and includes dinner, drinks (beer/wine), silent auction and other giveaways. All proceeds from the night will directly benefit the Pace University Men’s Basketball program. For tickets and additional information, please visit this link: http://www.alumni.pace.edu/s/1655/02-alumni/index.aspx?sid=1655&pgid=2305&gid=2&cid=4814&ecid=4814&post_id=0.

Pace Men’s Basketball Team is coming off a successful 2018-19 year that saw achievements like a return to the Northeast-10 Conference Playoffs, their first post-season victory since 2007 and four weeks ranked in the D2SIDA East Regional Poll. Thank you for your continued support! Go Setters!