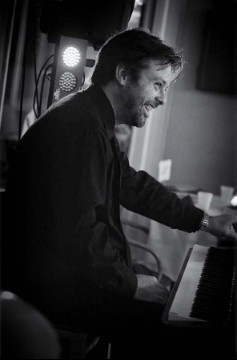 We are very sorry to announce that due to a terrible case of the flu, Mishti is not able to perform with us tonight. We wish her the best and a speedy recovery. However, the show will go on: her bandmate, CF Burke, will play a solo show with us. Come down to the taproom and rock out with some live entertainment.

Christopher Francis (CF) Burke is a musician, vocalist, songwriter and engineer/producer with over 15 years of professional experience. A multi-instrumentalist, he plays piano/organ, guitar, bass, accordion, tuba, harmonica, and bagpipes.
As a keyboard player, Chris has held down jobs in The Geoff Hartwell Band, Pat O’Shea and the Honest Men, The Jason Gisser Band, The Track, Johnny Feds, and Soulshine. His work playing in bands has led to sharing the stage or recording studio with artists including Sonny Landreth, Alan Evans (Soulive), Andy Aledort, Yonrico Scott (Derek Trucks Band), Gary Portnoy, and Shelton Becton. He also regularly performs solo with an acoustic guitar or piano in the NYC area.
In addition to his work as a side-man and engineer, in 2015 CF Burke released a solo EP “Halfway Ballet” which serves as a showcase of his songwriting, performing, engineering and mixing skills.

See you in the taproom!