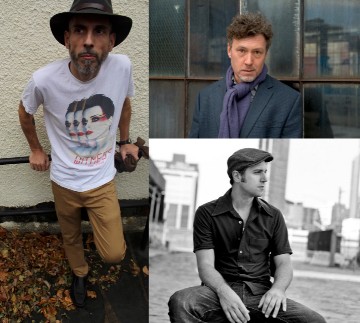 Join us for an evening of live music on Thursday, March 28th from 7:30 – 10pm. We welcome Greg Connors back to the stage, and two other performers, new to SSKB, Greg Jacquin and Radiator King. Each musician offers a unique sound. There is no cover for this show!

————————————————————-
GREG JACQUIN
New York based, indie-folk singer-songwriter Greg Jacquin has spent much of his life writing and playing music. From singing and playing guitar as a little kid through writing his songs with his best friend and cousin in the 80’s up to the present moment, Jacquin has been contributing to the rich music scene in New York’s Hudson Valley. ​Drawing on his own life experiences, the natural world, and politics, Jacquin is still out there pouring his heart and soul into every song he releases. His EP “Hudson River” was released to rave reviews in February of 2018. After playing the new songs all over New York and the Hudson Valley for the past year, Greg was eager to get back into the studio in the summer of 2018 and create his latest full release, “Clocks Slow Down”.
————————————————————
RADIATOR KING
Somewhere between punk and blues – a porch and an alley – lies Radiator King, the performing/recording name of Boston native and Brooklyn based, Adam Silvestri. Established in 2011, Radiator King’s music shows influences from both Dylan and Strummer with a sound described by Boston blog Allston Pudding as something akin to what “Tom Waits locked in a room for a month with nothing but a copy of Springsteen’s Nebraska” might produce. Whether alone with a guitar or backed by a band, Radiator King embodies the raw energy of punk, the grit and intricacy of delta blues, and the lyrical potency of folk in “songs that are the sonic equivalent to an old whiskey bar at the end of a dirt road.”
————————————————————-
GREG CONNORS
With a deceptively simple sound of an old country or blues record, his sound is at once raw and vulnerable, but distilled through a caustic brilliant prism of sound. Connors freshly weaves a view of emotion and experience; lyrical branches wound densely in and out of darkness and diffused light. His own fresh cut and vulnerable sound journey can do any listener a great service. And if you’ve ever feel the limb snap, it may just be his dry wit.
From his teen years, drifting the fringes of various NYU independent music festivals and on to places such as CBGB’s, Greg’s path led him to Atlanta, Georgia, creating deliberate vibrations at such local favorites as the 40 Watt Club, in Athens, and the Variety Playhouse in Atlanta, and then back to NYC again, with various stops along the way.
————————————————————-