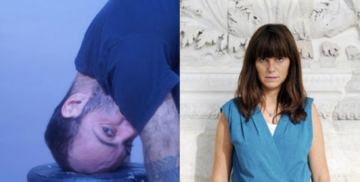 Our resident artists Deville Cohen & Christine Rebet are opening their studios to the public for KinoSaito’s first open studios weekend of the 2022 season. Come meet the artists, see their work in progress, and enjoy light refreshments.

KinoSaito Residency Program is a studio + residency program designed to provide artists with the space and time necessary to focus concentrated attention on any part of their practice they feel is ripe for development. The program hosts two artists at a time for six-week sessions during the months of March through November, ensuring that practicing artists, their ideas and their energy will be a constant presence at KinoSaito. Each artist is given a generously proportioned 900 sf studio with large windows and high ceilings, a loft living quarters, a kitchenette, and a private bathroom. Regular open studio events invite visitors to talk with artists and see works-in-progress.

Deville Cohen (Director) is a New York City based non•disciplinary artist. He studied sculpture at the KHB Berlin from 2002-2007 and received his MFA in film/video from Bard College NY in 2010. His videos and installations were shown internationally in museums and galleries such as MoMA PS1; SFMoMA; The CCA Tel-Aviv; PS122, NYC; and The Living Art Museum, Reykjavik. He began creating for the stage during a residency at the Wooster Group Performance Garage in the summer of 2014. His creation underline, in collaboration with the composer Hugo Morales, was commissioned and co-produced by the Deutsche Oper Berlin and The Munich Biennale for New Music Theater in 2016. In 2018 he co-created MENAGERIE with choreographer Shamel Pitts for Gibney Dance Company in NYC. In 2019 his new creation McGuffin was commissioned and produced by The Center of The Less Good Idea in Johannesburg, South Africa. In 2020 Deville Founded Hand To Mouth, a new dance Company with the support of PS122 Gallery in NYC. He was an artist in residence at Recess Art; EMPAC Troy, NY; Lower Manhattan Cultural Council (LMCC) workspace, NYC; Fountainhead in Miami; and LMCC Process-Space NYC.

Drawing is at the heart of Rebet’s practice, which she often develops into animated films, sculpture, installations or performance art. With a background in theatre design, Rebet presents many of her animated films within custom- built spaces and installed together with props to create an immersive environment. Working with the traditional techniques of early animation she explores the unconscious and creates tales that are both anti-heroic and satirical. She uses the lens of history – reflecting on past events and traumas, both personal and collective, whilst painstakingly working with the traditional techniques of early animation – as a means of assessing the current conditions of shared historical narratives, cultures and environments.