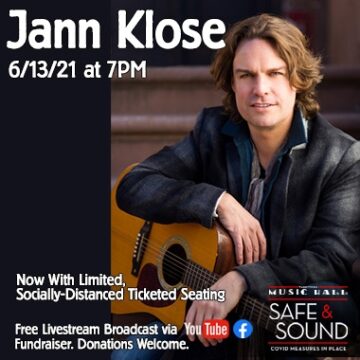 Jann Klose will be performing live from Tarrytown Music Hall on June 13, at 7 PM.
This concert will be both in person and online via Facebook and YouTube.
In-person seating is limited. Please register in advance at https://tickets.tarrytownmusichall.org/Night-InWithJannKlose.
Fans and friends are encouraged to support the artist and event with a donation at the same link.

JANN KLOSE’s has opened for both Pat Benatar and Rusted Root at the Music Hall. He is an award-winning pop singer-songwriter, who has released six albums and two EPs. He was raised in Kenya, South Africa, Germany and the United States. His latest single “Love You the Most/Te Amaré Más” (from the movie soundtrack “Married Young” (Amazon)) and has streamed over 3 million times, and is climbing the Top 40 radio charts. Jann is an ambassador for Desmond Tutu’s TutuDesk campaign and Brick by Brick Uganda. He is the singing voice of Tim Buckley in the movie “Greetings from Tim Buckley” (Universal).

Singers love working with Jann. Signed to South Africa’s legendary Gallo Records, his most recent album, “In Tandem” includes duets with some of South Africa’s leading pop-singer-songwriters including coaches from that country’s “The Voice.” He’s toured there since 2015, first as an independent artist. Recently, Jann duetted with Liz Callaway on her recent “Comfort and Joy – An Acoustic Christmas” album.